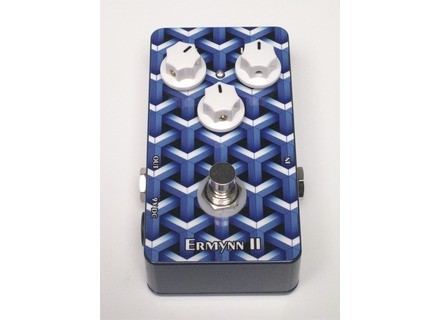 The Ermynn II is not a high-gain pedal when played through a clean channel (with low or modest gain), but offers some very sweet overdriven sounds, from a bit of grit when turned low to a more searing and edgy tone when cranked full. When combined with a crunch channel or even a high-gain channel (obviously you don’t need much Gain from the Ermynn II in such an instance), the tone achieves the next level of dirt and energy quite nicely and helps to give some added balls to your amp. You not only hear this in the notes’ sustain and singing quality of leads, but also when playing some muted chugs that are far punchier in quality. The Tone knob is very sensitive, and in two ways. First, a slight tweak can produce too much or too little bass or treble response, which brings us to the second point: There is an enormous variation from all the way toward bass and all the way toward treble. This makes the Ermynn II very responsive to thin, weak and trebly pickups or dark and muddy pickups, thus allowing you to dial in with added precision.

OVERALL IMPRESSION:
The Ermynn II was developed in France by Doc Music Station; it is an easy to use pedal at a fair price of 179 Euro. It is a scaled down and smaller version from the original Ermynn. It sounds perfectly fine on a clean channel, particularly if you don’t want excessive gain or dirt, but really shines when added to a crunch or high-gain amp (in doing so, you don’t need as much gain or drive from the amp, while keeping the pedal’s gain less than half-way). It has an unmistakably cool paint-job with solid construction in all its parts, from the chassis and knobs to its guts. The drive or distortion is governed by JFET transistors (located between the input and output of the sound) and is very sensitive with both the Gain and the Tone, thus making it appropriate for music requiring just a hint of dirt (e.g., jazz or blues) to classic and modern rock (particularly when combined with a dirty amp channel). The JFET transistors help reproduce that Plexi tube sound to create a natural saturation and organic sounding tone, but while remaining very quiet (even when turned up full).

EASE OF USE:
How much Gain needed from the Ermynn II varies considerably, and depending on how clean, crunchy or high-gain your amp’s channel. With a clean channel I like the pedal’s Gain up full or darn close, as doing so produces an edgier tone (too much for most jazz or blues and more appropriate around 10-o’clock for those genres). Once I add the Ermynn II to some dirt, setting the Gain at about 10-o’clock seems sufficient, although that depends on how much dirt you’re getting from the amp (if it’s very dirty, then simply having the Ermynn II on with Gain almost off completely produces a nice fullness with added harmonics to the sound). The Level works in conjunction with the Gain, in that the lower the Gain, the higher the Level needs to be, which should be common sense. However, once the Gain reaches about 1-o’clock I found there no need to further tweak the Level… you can keep increasing the Gain and the overall volume does not increase that much. The Tone knob does add some volume, as you progress from full counter-clockwise to clockwise (from maximum bass to treble); and so, there is a bit of tweaking of the Level knob depending on the degree of bass or treble added and to balance out the overall volume. The Tone knob is very sensitive – slight movement of the Tone knob can produce a bit too much bass or treble, and so you need to know your setting well for proper dialing in when gigging.

RELIABILITY & DURABILITY:
The Hammond 1590B aluminum case is not only lightweight, weighing 230g (8oz), but it provides shielding of the electronic card. Measuring in at 113 x 67 mm (about 4.25 x 2.25 inches), the plastic knobs feel of good quality, and when turned the pots feel both solid and smooth in quality. The audio components comprise of carbon resistors, Wima silver mica capacitors, and the Ermynn II is protected against over-voltage and reverse polarity. The cable input/output both are located on the sides, as well as the power supply insert (standard 9v 2.1 mm), and so there is minor concern with stomping and hitting any of the inputs/output. This true bypass pedal also has Neutrik jacks and Alpha 16mm faders for the Gain, Volume and Tone pots. The footswitch is somewhat close to the Tone knob, but that knob is of a good quality, and so any slight stomping pressure on the Tone knob should not pose any concern. The LED on/off light is small and well protected by the three knobs.