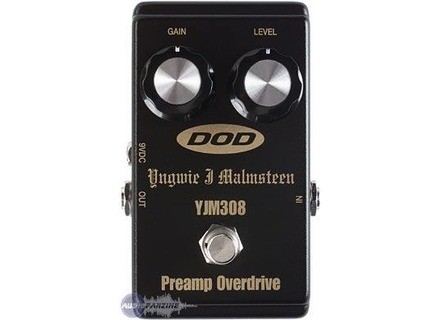 DOD YJM308
5
The DOD 308 Yngwie Malmsteen pedal was created for Yngwie based on a couple of his vintage DOD 250 overdrive pedals. While this is not an exact copy of the original circuit used in the DOD 250 it has proven to be a close copy and a very good overdrive. The pedal is simple in nature; it provides addition drive and gain to overdrive the front end of a tube amplifier. It is not to be confused with a distortion pedal. There are two 1/4 inch jacks for input and output and a 9 volt adapter jack available for an external power supply (sold separately). It is an analog circuit based on a 4558 op amp, the same as in the tube screamer; however it only uses half of the circuit to emulate the older 741 chip. It is a floor pedal with two controls, one for overall level and one to add gain.

This pedal should be used near the front of your signal chain and in conjunction with a tube based preamp. It is very simple to connect and use. By manipulating the overall level and gain you will be able to achieve an overdriven sound with minimal noise. The manual is basic in nature but the pedal is so straight forward that it serves its purpose.

This pedal is best used with a guitar but can be used with a bass as well. The pedal does not have a true bypass switch but the circuit that is used will only minutely color your original sound. By manipulating the gain control the overdrive characteristic will go from warm to harsh as you dial from minimum to maximum. The overdrive colors the sound slightly and is not a clean source of gain. The only real poor feature of this pedal is the lack of a LED to determine if it is engaged or not. When the settings are pushed the difference is noticeable but at lower settings may be harder to discern in a loud situation.

The best part of this pedal is that it does its simple job effectively without being encumbered with too many knobs and circuits. It is based on the old DOD 250 overdrive but uses some more modern circuitry due to either availability or price. The tone is reminiscent of a TS-9 with a more open nature, probably because they use the same 4558 op amp; only the DOD utilizes half the circuit. The pedal is built like a tank and will survive many years of use. I have used and own many other overdrive devices but sometimes there is beauty in the simplicity of a simple design and this pedal reflects that. If I had to I would replace it.
Did you find this review helpful?yesno
»

DOD YJM308
3
This is the black 2 knob Preamp Overdrive pedal by DOD. It was built for Yngwie J Malmsteen similar to the old DOD pedals that are not made anymore.

I bought this guy through AMS American Musical Supply as an impulse buy. It was $30, I think it still is, and is worth checking out.

I like that the pedal is cheap and durable. It is a simple 2 knob design: Gain and Level. The pedal can get as loud or as quiet as you need and break up the signal to your liking.

I don't like that there is no LED light to tell me if the pedal is on or not. I get that it is a cheap pedal, but what does a light cost?

Durable. Metal case and jacks. The knobs feel solid. I could step on this pedal a million times and not feel like it was going to break.

Great cheap overdrive pedal. My only complaint is the lack of LED. Other than that it is well worth $30.

DOD YJM308
4
Awhile back, Yngwie Malmsteen teamed up with DOD to create his own signature boost pedal. The boost is modeled after his famous grey DOD250 but with some slightly different tweaks. It features the same level and gain knobs that you'll find on any other DOD250, so there's not much that's changed on the outside aside from the graphics and name. For those wondering, the name is after his favorite Ferrari - the Ferrari 308.

These things are built like tanks. Seriously, you can stomp on them all day without any issues. I love how small they are, too. This should have no problems finding a place on even the most cramped pedal board. The biggest thing I dislike about this pedal is the jack. It's not your standard Boss style barrel jack. DOD uses these headphone style jacks, so you'll probably need an adapter if you want to run it via a wall wart.

The pedal itself is modeled after the DOD250, but it's not the exact same. This actually has a bit more treble than the regular ones. I find the extra treble to be a bit too harsh compared to the original DOD250, but it's not a bad pedal at all. A few tweaks can bring it right back into DOD250 spec. There's a little tone suckage, but it's very minimal. Those looking for an oldschool boost like Yngwie will be fairly pleased with the sound. I usually find myself wanting a tone knob on these pedals, though.

If you're looking for an oldschool boost, this can do the trick. It's nicely built and is pretty good for the price. However, I think there are better versions of this pedal out there that sound more musical. Then again, it's hard to argue the price they go for, especially used. If you're searching for your first boost, it's probably a toss up between this, the MXR Distortion III and the Bad Monkey.
Did you find this review helpful?yesno
»

DOD YJM308
4
(Originally written by barvador/translated from Audiofanzine FR)
Very simple overdrive with volume and gain controls (no tone control). Malmsteen ? This guitar doesn't sound like Malmsteen at all (although I must admit that I don't know everything he's made...). It's a new edition of an old and famous DOD pedal but the sound is more aggressive and with more highs.

Cons: mini-jack PSU input, no LED for the effects and no tone control. Many cons! But I got it secondhand at a small price. I find a tone control is very important for an overdrive pedal.

Nothing to say, both controls are interactive.

I play mainly blues rock. I read a lot of good reviews about this pedal (which isn't conceived for heavy metal) and I tested it with several setups.

With this pedal I use only one setting: gain at 12 o'clock (max.) and volume at 10-11 o'clock with a good Strat (preferably with rosewood fretboard) and a good tube amp (Classic 30 with Celestion speaker or Classic Lead 80).

More extreme settings give very aggressive results and a poor definition. My "soft" setting adds width and brilliance to a slightly crunched sound and provides it a dirty and garage character. This sound is good for soft blues rock and rebel pop.

With a Les Paul the result isn't that good because it's too muddy. The pedal gives average results with the clean channel of the Classic 30, it's much better with the lead channel. The pedal seems to be conceived to boost an overdriven channel.

This pedal is different from a warm and tight sounding TS9. It's a real booster (the name is "preamp overdrive").

I give it only a 7 because it's not very versatile and it doesn't provide a great precision.

Try out the pedal before buying it and think about what you need it for. I love overdrive pedals. I own several models and they all sound different. This pedal provides a nice sound character with certain settings but it can also prove too aggressive and that's the reason a tone control would come in really handy. It's a very special pedal like most signature products. It's all a mater of taste...

And it's very affordable.
Did you find this review helpful?yesno
»
Read the 11 user reviews on the DOD YJM308 »