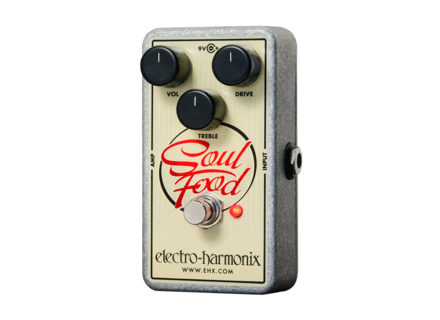 Electro-Harmonix Soul Food
4
Introducing: the soul food is cheap and large-scale replica of the pedal that has caused a lot of ink, hype, sound snobbery and money (1500 euros still used and 400 reissue) the klon centaur!

Késako the klon?
A priori transparent overdrive, with 3 settings: volume, overdrive, and treble.
It is used by the largest, rightly or through, including its buffer and pulls a reputation for clean very effective not usurped boost!

Soul food is placed so as a clone of this legendary pedal, and it's no surprise that we find the same controls as well as a buffer activated or not internally. (A good point)

A footswitch, LED, battery power or the one supplied (top for the price!) And we left.

There are therefore three knobs and an activatable or not buffer.

Regarding the buffer: I noticed a small treble gain (I provided a pedalboard enough, and I had no buffer), nice but nothing more. At the same time it is one of the goals of a buffer to be discreet, and there, nothing to say.

The settings are then very simple, the knobs are responsive and allow you to vary the parameters although they are resolved.

So now, we have not as transparent pedal the world, when you push the gain was something quite messy, which removes some "body" to your sound. We lose a low hair, but we win the treble and midrange.
But I do not'll probably call it a tube screamer, no soft side that I associate with TS.

Where this pedal turns out great, it's on an amp set to crunch, and used clean boost (ideal for me: 14h volume, 9am gain, treble depending on the material). We can tackle big solos (according to the gain set), or just earn some saturation (just enough) to attack a little.

It is nice too all the time if you have enabled hardware that sounds a bit "dark". For example, I have an orange with a Les Paul, activating it, I have a more light for some nice rhythm, particularly by increasing the treble.

on the other hand, spent a certain amount of gain (I say 11h 12h), the sound becomes sloppy and not very dynamic.

For me it's really usable as clean boost pedal that goes slightly dirty your sound, but not an overdrive. If you are looking for something a little more guts, it's probably not the pedal to make, here we are in the field of subtle.

For the price, you really have a pedal quite usable, supplied with a power supply (!), Which sounds good in clean boost!
For me, this is the "Litterbug its light" perfect! You want a little grain vox on your clean sound? ideal! A little bit more gain and volume for a solo that kind of mix? So perfect!

Very simple, and effective, really a good pedal for me!

Warning against by the following:
- Your sound is already relatively "bright": this pedal tends to reinforce the sharp side, nice for a marshall, orange or humbuckers, much less on guitar fender fender amp for example. You may end up with a sound too thin and aggressive in the treble
- Looking for an OD, no subtlety: it is not in the field, strictly speaking, overdrives for me here. Setting a high gain sounds really means, it's really to slightly dirty your sound, if you are looking for a true overdrive, look elsewhere.

on the other hand:
- If you need a boost
- Which may slightly dirty your sound for rhythm or solo
- With a buffer (you have lots of cables)
- Good price

Go for it!
Did you find this review helpful?yesno
»

Electro-Harmonix Soul Food
5
Introducing: the soul food is a clone of a pedal that has caused much ink, hype, musical snobbery and money (1500 euros the original pedal 400 reissue!): The klon centaur!

Késako the klon?
This is an overdrive pedal 3 controls, volume, gain and treble, used by a lot of guitarists, and among the largest! She is also known for its excellent buffer, like pedals equally hyped to Pete Cornish.

Soul food stands as a copy cheaply and big production of this pedal. So it's no surprise that we find the same controls.
It was also a buffer snap or not an internal switch (a good point for the optional buffer)

A switch, LED, provided food (amazing for the price) and we left!

There are therefore three controls, which are very effective in their settings: the volume is very gradual, but gives significant gains, the gain goes far enough and the treble knob works very well.

It is very simple to adjust its sound in 3 steps.

Only painful thing: in my case, the screws of the case were tight so strong that they were impossible to unscrew the screw driver, I get out of the drill!

First, a few words on the buffer: having a pedalboard not provided enough buffer, I tested. On, I earn a little treble, without having drastic changes in my sound. what we want with a buffer, it is a success for me, it is very discreet and efficient.

On the pedal itself: in clean boost (typically volume 14h, 8h gain) on a light crunch amp lamps, battery at the break up is a killer! According to the gain that is placed it can range from a mild "dirty sound" to the big lead.
The treble knob is responsive and can compensate somewhat its material (typically if you have hardware that sounds a bit "dark" kind Les Paul + Orange like me)

Please note that the pedal is not so transparent by cntre than that: we lose low during activation, and we win some mediums, which is very nice to get out of the mix.
As against this is far from a tube screamer, it was not at all the hot side / soft (it is rather the opposite) and the gain medium is not as exaggerated as a TS .

It can also leave all the active time to earn a little "brightness" and get a little dirty his sound. Typically, if you want to redo a little vox sound a little dirty for example.

on the other hand, past 12pm gain, the sound becomes rough. It's dirty, it does not sound terrible. Moreover, we lose dynamic and side transistor I find really stands

It is clearly made for light drives or very mild.

For me, this pedal is perfect in the field of subtle overdrive to slightly dirty thereof, or simply serve as a boost.

It will therefore pay attention to the following:
- If you are looking for a slightly muscled Overdrive to type in fairly saturated stuff, it's not a good idea to move towards this pedal. She really made for light drives.
- If you have hardware that already gives you a fairly acute. Unlike a tube screamer, it does not go too soften the sound, but to lighten it and make it more aggressive. Ideal for a setup fairly loaded low mids and bass, with little sharp, but with fender guitar (micro mouhahaha bridge) on a Fender amp, I let you imagine the carnage. Lower the treble potentiometer lightering will sound even (unlike a tone, here you will not gain low), so do not correct this defect espérerez

on the other hand:
- If you need a boost
- If you like light and subtle drives, and you're just looking to get a little dirty your sound
- If you have hardware that sounds pretty "bassy" and want to compensate for this
- If you need a buffer
- And you do not have 1500 euros to put in a collection pedal

This pedal is perfect! I bought it just for this, and it is one of the best purchases I've made so far. As a group, it proves almost essential for my solos, and the gain in treble / midrange really gets me out of the mix at the right time.

And all this for a ridiculous price, and with the power supply provided in addition, EHX hat!

33 of 34 people found this review helpful

Electro-Harmonix Soul Food
5
A volume a Treble and Drive ... not reach the pedals adjust it to be really ...

no need for manual!

I have a lot of pedals all brands Boss, Mi Audio, Rat, Celmo Pimento, Fulltone OCD etc etc
Soul Food this good and has a personal sound that pleases or not!
but for me it's interesting because it avoids sounding like everyone by combining several pedals together for example !!! and it sounds good as we want to just turn the knobs and adjust according to what you want!

This is soul food to try! especially for the price no regrets! it's hot it makes a fat good crunch to its settings if you push ... I use it without the buffer! I use an amp Sovetk Mig 100 and I can tell you that it's not lack of body! it sends serious!

props's review (This content has been automatically translated from French)

The settings are simple, 3 buttons, an internal hard bypass switch / buffered and that's it.
We will generally be able to use it in two ways:
- As a booster with the volume above 12 and below the drive from 9 am;
- As overdrive with the drive over from 10.

I use it mainly early in the effects chain, right after the fuzz, with the following settings: Volume 13h, 8h Drive, Tone 12.

With the mini drive, we have a very transparent clean boost. By mounting the drive between 8 and 9 am we start to make a very nice little bump in the midrange. This is my favorite position. Above, the drive begins to take over but severe fall: I like less.

Note, I can not driver my germanium fuzz as you would with a tube screamer. The sound becomes "gritty" unmanageable, this is a very bad combination (may be due to the buffer that my house is on).
on the other hand in an amp / preamp tube, or even in another overdrive on single or dual microphones, this is the big ensured potato!

Apart from this incompatibility with fuzz and feeble low on extreme settings, it's a good pedal. Its value for money is very good.

Did you find this review helpful?yesno
»
Read the 7 user reviews on the Electro-Harmonix Soul Food »

Published on 01/25/14
We visited the Electro-Harmonix booth at NAMM 2014 to listen to a few new effect pedals for guitar.