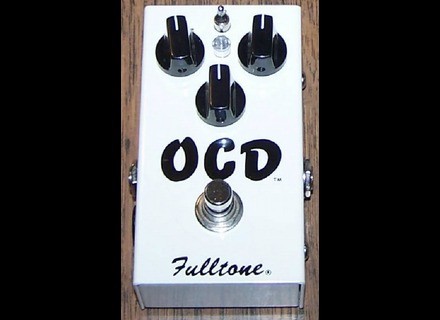 Fulltone OCD V1.2
5
Where do I begin with this pedal. This is quite simply one of the best pedal you can buy on the market.
Allow me to begin with giving some changes in sounds and makeup with the 2nd version of this amazing pedal.

The OCD stands for Obsessive Compulsive Drive. This pedal is made to high standards and is quite an inexpensive boutique pedal.

This pedal is good for slamming the front of your amp into high gain territory or just hitting it with some clean boost. Either way is equally spectacular.

The OCD pedal takes over where the tube screamer left off. Not only does this pedal make your amp bite more but it really spanks the front end giving it good saturated distortion. The tone is very fat and warm. It makes a Strat get a little beefier when plugged into a clean amp.

Pretty simple functions with only 3 knobs and one mini switch that controls the high and low peek voicings. Good for changing or tailoring the voicing to fit your needs or your amps needs.

The sound is spectacular with this pedal. The color of the tone and the versatility of the pedal makes this a standard in gear magazines must have pedals. There isn't a sound that I don't like in this pedal. It does all of it so well that it is hard to choose which setting I like best. If I had to pick, I would go with the clean boost setting which would be taking your gain to around 9:00 and you tone around noon and your level as desired and slam the front of a heavily overdriven amp.

Use this with a Strat and a Fender Deluxe and you'll have classic rock tones for days. Put it in front of a Marshall JCM800 with a Les Paul or a Charvel and you'll be cranking some heavy rock n roll tones.

At the price point this just makes sense. And you don't even have to modify this pedal to get it to work. I give it a perfect for that reason alone. Being able to sound amazing at under $150 for a used one and be ready for stage use is a must own.

I recommend this pedal to any gigging guitarist and home player. This pedal will excite the dreamer guitar player for world changing tone. It is a blast to play and will be in my pedal hall of fame.

See my reviews of the other versions to know the difference and which one you own.
Did you find this review helpful?yesno
»

Fulltone OCD V1.2
5
Already detailed in my opinion on the Mk1, and in other reviews, do not bother to add (Nescafé? ..).
Important point I will make below some comparative with the numero uno: when I will detail the differences between the first two models of this pedal is of course proportionately (eg when I say "the means + serious "it will not be on a scale of 1 to 100, 100 and 50 for one another, but rather 95 for one and 85-90 for the other).

Extremely simple configuration. I do not have manual for purchased used.
Changes in the increase or decrease of the knobs is linear, no sudden increase in volume, tone or other. The gain, however, in his Derner quarter, not changing very much (but not need any more in view of what we can already get there).

Note that compared to the Mk1 version, we can get an even lighter od (gain knob to zero), the gain gradually evolves +, and goes a little less far than his big sister.

Effective effect, whether light or OD OD further. Used on guitars.
I prefer to use a slightly OD, and sometimes boost my amp saturation.
Note that there is a slight difference in level between the HP and LP sound (without touching the knobs, you will very + HP, with more bass and midrange hair +)
Gain pushed to block the sound from slightly to a fuzzy sound. In any case, good headroom available, you can go pretty far (without going not in the mega sustain or metal but it is sending).
Finally be aware that this pedal is extremely reactive to the type of game (light, violent, pedal adjusts the sound output ... As a real amp pushed).

Again, it must be differentiated with respect to the Mk1. This Mk2 is less "booster" serious and high frequencies (this is especially evident on bass) and will bring out slightly more than her big sister, mediums. It will therefore appear + "balanced", and upon reflection, I often read on forums that people are looking for OD respecting the natural sound of the whole guitar - amp ...
Indeed, the Mk1 is flattering to the ear but because I want a + a second channel "amp" light OD, I think I'll go on the Model 2, which seems to me more équilbrée is the word.

Used for 1 year and a half, alternating with the Mk1 model. Hard to choose!
In short, everything depends on the use to which it wishes to do (for the person who hesitates between the two versions I'm talking about here): + for his violent, I would favor the Mk1.
I've used and tested a lot of models so ...
I like his size, the possibility of supplying 9 or 18v, its simplicity and speed control, responsiveness to the game, the range of sounds that can be delivered ...
My only question now is to decide between the Mk1 and Mk2.
I thought the indéboulonnable Mk1, well maybe not

I remake that choice without hesitation of course!
In view of the different possibilities of using the pedal, value for money is excellent, yes!