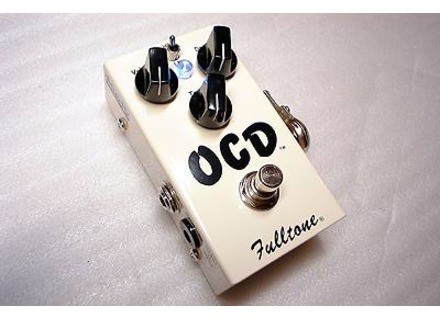 Fulltone OCD V1.3
5
I will begin with the new added or taken away features to the 3rd version of the OCD by Fulltone.

*NOTE: Some OCDs with a serial number below #16061 have been marked v4 on the interior, nevertheless they still have the v3 circuit board and do not have all the modifications of the v4. A rumor has been going around that the labeling of these v3:s as v4:s was a joke from the assemblers - weather or not they truly differ from the v3:s is not known.

Where do I begin with this pedal. This is quite simply one of the best pedal you can buy on the market. The OCD stands for Obsessive Compulsive Drive. This pedal is made to high standards and is quite an inexpensive boutique pedal.

This pedal is good for slamming the front of your amp into high gain territory or just hitting it with some clean boost. Either way is equally spectacular.

The OCD pedal takes over where the tube screamer left off. Not only does this pedal make your amp bite more but it really spanks the front end giving it good saturated distortion. The tone is very fat and warm. It makes a Strat get a little beefier when plugged into a clean amp.

Pretty simple functions with only 3 knobs and one mini switch that controls the high and low peek voicings. Good for changing or tailoring the voicing to fit your needs or your amps needs.

The sound is spectacular with this pedal. The color of the tone and the versatility of the pedal makes this a standard in gear magazines must have pedals. There isn't a sound that I don't like in this pedal. It does all of it so well that it is hard to choose which setting I like best. If I had to pick, I would go with the clean boost setting which would be taking your gain to around 9:00 and you tone around noon and your level as desired and slam the front of a heavily overdriven amp.

Use this with a Strat and a Fender Deluxe and you'll have classic rock tones for days. Put it in front of a Marshall JCM800 with a Les Paul or a Charvel and you'll be cranking some heavy rock n roll tones.

At the price point this just makes sense. And you don't even have to modify this pedal to get it to work. I give it a perfect for that reason alone. Being able to sound amazing at under $150 for a used one and be ready for stage use is a must own.

I recommend this pedal to any gigging guitarist and home player. This pedal will excite the dreamer guitar player for world changing tone. It is a blast to play and will be in my pedal hall of fame.