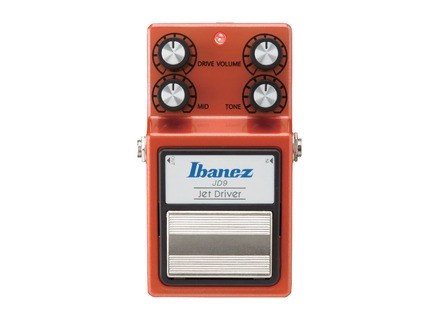 JD9 Jet Driver, Overdrive pedal from Ibanez in the 9 series.

Ibanez JD9 Jet Driver
5
I've had it a week after her sister bought sd9mod and I was very surprised, nothing to see them!

gain-volume, high and mid to lézégu used to select the range of mediums (from 650Hz to 2000Hz from the cloth that serves as a manual). This affects the mid distortion, which suggests that the frequencies are changed before the gain stage.

The bypass is a bit noisy, and as the sd9mod is when releasing the pedal (not great for Hotlicks in rhythm).

Husky and little or no residual noise.

It's simple to use, but the setting makes a mid short time.
The maximum rate of distortion is moderate, the bass is well proportioned, the sustain is rather short.
Bypassed the sound is good, much better than the boss ds1.

Strange how distortion, rather warm and full mids, and cleat it off not really gain level (DiMarzio custom 7/squier stagemaster7), it is rather in the rate that produces a JCM900.
In practice I lézégu to 15hrs, in the mid 9HR, adonf gain.
It's ultra-musical and singing, solos going very well (with 7, not yet tested with other guitars) because there are many bodies.
If the rate is at least moderate the attack of the notes does not collapse as the ds1, so for the 80s it will still rhythmic. With an overdrive in front of it does not really matter arranges finesse, must therefore take the jet driver as it is.

With the gain at half or less it's too fat for an overdrive, unless you like that kind of sound like fender at an end, and the cleat lézégu just enough.

She will need a tube amp pushed to give it the sustain. As it is confusing, in fact it behaves rather like an amp compared to other pedals I have without kick over the traces.
I summarize therefore, warm and very musical, big presence in the midrange, with lots of possibilities casually.

It will not duplicate your other pedals, it's on.
Therefore excellent.