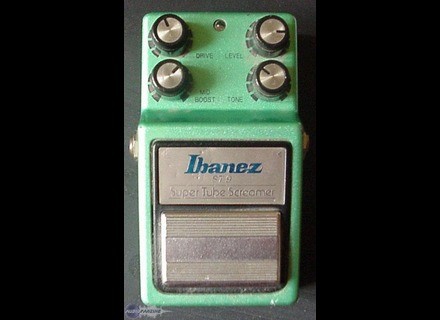 Easy to understand, 4 buttons: drive, level, tone, mid boost which is the fourth button that does not exist on the TS9.
It mimics the TS9 pushing the drive too much and by the mid boost to 0.
Less easy to adjust the TS9 for a button and more and larger drive.

Same qualities as the TS9, simple and effective with a guitar and an amp.

Owner for 10 years (gift)
Good Loock vintage, its legend, more sounds than the TS9, hard to find but available in reissue, same flaw as the TS9 for the commissioning of the effect, sometimes you insist.
I compared it with a TS9 reissue, I had a ST9 melleur her in my opinion.
Listed quite expensive, but it's a good pedal, heavy and solid box;
good alternative to the original TS9.
Finally, why TS9? Because of the name "Super Tube SECAM," it says on the pedal below Ibanez, but it's hard to see in the picture ...

vancouverois's review (This content has been automatically translated from French)

Ibanez ST9 Super Tube Screamer
5
The ST9 is the culmination of the tube screamer, the sound is quite similar to TS but dlivre more sustain and drive.
It has two JRC4558 chips instead of one on the TS.
A fourth Mid Boost button to better control the tonality.

It's not really complicated argler, it varies largely depending on amps.

It far outperforms the Tube Screamer and a lot of TS clones that are available on the market called "boutique".
I use it on a Start, a Tele P90 and also a Yamaha SG2000.
With the drive rgl high enough, a little compression and a tube amp it is fast in the Santanesque sustain. The overdrive sounds like zztop too.
There are certainly many other possible sounds, everything is a matter of taste, guitar and amp.

I have two pedals of this type, and a Maxon ST9 Maxon ST-01 (electronic diffrent but look identical) Reserved Japanese domestic market.
I tried many overdrive be my choice before the Super Tube Screamer.
There is more gain, it sometimes lacks in TS but TS will be a little easier argler for clean boost or overdrive softs.
I would do without hsiter this choice, the prices are quite levs and is due to the scarcity of the pedals.
Note that Ibanez was going to happen in the SERIES 10 as the STL Super Tube. The circuit is the same I believe it.