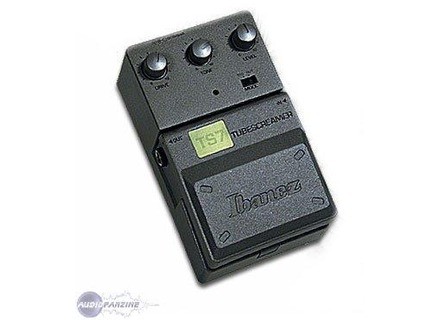 TS7 Tube Screamer, Overdrive pedal from Ibanez in the 7 series.

Ibanez TS7 Tube Screamer
5
Got this b/c I found out that they have the Orig JRC 4558 Op Amp Chip and have the orig TS-9 (80's models) circuit path/components! New TS-9 reissues DO NOT!! I think it sounds alittle flatter than my Biyang OD-8 (TS808 clone) but WAY tighter and I only use it for boosting my Hi Gain tones. Some complain the switch is cheap but the pedal is cheap and replaceable. Has a metal chasis too. I love mine!!
Did you find this review helpful?yesno
»

Ibanez TS7 Tube Screamer
2
The Ibanez TS-7 Tubescreamer is a basic overdrive pedal with a few extra touches. A metal pedal housing covers plastic jacks for the input and output. Three knobs are used for drive, tone, and level that are the “Tonelock” signature knobs. The user pushes the knob and it pops out, you dial in your setting and then push the button back into the pedal to lock the setting in place, which is a nice feature. This model also features a “Hot” switch that adds more saturation to the signal.

This pedal’s selling feature is that it gets the sound of TS-9 and then some while having the Tonelock set and lock knobs. This is great for someone who moves their pedals around a lot as it keeps your sounds locked in place and since the knobs move into the pedal housing they are less likely to get damaged if the pedal gets thrown around on the way to a gig. The plastic input and output jacks are useable but metal jacks that lock to the housing would make this pedal a lot sturdier. The platform used to engage the pedal is solid but the actual switching mechanism used is the weakest part of the pedal. After a few months of use this pedal starts missing when you go to engage it and it takes an extra stomp to get it on or off. After awhile this cheap switch just wears out and it takes more and more stomps to get it to turn on.

The sound quality of the pedal is actually pretty decent. It doesn’t do warm breakup excellent, but just ok. Using it as a boost for solos is adequate or as a round saturated lead tone with the “hot” switch engaged is this pedals best uses. I wouldn’t use this as a basic distortion for rhythm guitar because it is just too smooth and compressed. Trey from Phish is known for using a Tubescreamer into a Tubescreamer and that’s what the hot mode of this pedal sounds like. Compressed and saturated. The normal mode of this pedals sounds like your basic TS-9 Tubescreamer, just light overdrive with a bump in the mid section of the EQ.

Overall I would get this pedal if I needed a temporary light overdrive or heavy overdriven sound, but it’s not suited for a distortion sound. The pedal has a strong housing, but lacks strength in the input/output jacks and the bypass switch (which is sure to fail over time). The pedal has a decent sound, but due to the switching issues I would not purchase this pedal again. I would save up and get a nicer built and sounding pedal like the Fulltone OCD. If I were to choose another pedal in this price range I’d go for the Transparent Overdrive by Danelectro (better sounding and more versatile all together) or the Bad Monkey Overdrive by Digitech (very similar sounding with a much better build quality and two band EQ, but maybe a little less gain on tap).
Did you find this review helpful?yesno
»

Ibanez TS7 Tube Screamer
4
The TS7 is a really cheap version of the Tubescreamer. It has the added feature of a 'hot' switch. The hot switch takes your normal Tubescreamer sound and adds a bunch more gain.

A cool feature of this Tubescreamer is the knobs push into the pedal case. You can pop them out, set them how you want them, and then push them back in. This makes it impossible to accidentally tweak your setting while gigging.

As far as I understand it this pedal is just a few component values off from the original TS808 circuit. Having owned both this pedal and a TS808 clone at the same time I can safely say there is little to no difference when the hot switch is disengaged.

This pedal is built like a tank, you'd have to try to break it.

Its setup like your classic tube screamer with an extra switch. It has tone, level, and gain. Its pretty much as simple as it gets.

I've only ever used this with guitar.

With the hot switch disengaged it works just like a tubescreamer should. Mild OD, great for slamming the front end of a barely broken up tube amp. Sounds gorgeous.

I believe it has a buffered bypass, but its still a very transparent pedal. When bypassed it doesn't color your tone.

The hot switch brings something new to the table. When its engaged this pedal has tons of gain. In my opinion more then you'll ever need with this type of pedal. The Tubescreamer circuit really shines when its boosting a tube amp, by itself its nothing special. The hot switch takes that nothing special tone and just gives it way more gain. The worst part is that is also jacks up the noise floor to the point that its essentially unusable due to noise.

The think I like least is the hot switch. Its a completely useless and unnecessary feature in my opinion.

That said, with the hot switch disengaged this pedal is pretty much a TS808. Which is a thing of beauty.

You can find these things used for less than thirty dollars. At that price there is no reason not to buy one. I sold mine because I built an exact clone of a TS808, and honestly I would have been just as happy if I had just stuck with the TS7.

N'drix's review (This content has been automatically translated from French)

there is a choice between two styles one taken directly from the TS9 another hot fashion appeal and much more modern and bold.

there's a between it and an output jack, a listing Ventuel for power supply and trape for the battery.

the carcass is very beefy.

The use could not be easier and it uffit a few minutes to try plusiseurs really DIFFERENT sounds or adopt one that suits you mine, really very instinctive in emem time given the number of knob, nothing more Easy one button to drive the level of distortion, tonalite and level that manages the output level (effective enough) and a two-position selector for both modes of the pedal.
not need the manual ...

I begin with my section prfr the TS9 mode, high sympathetic vintage sound pretty good as it should be, (purple haze or whole lotta love etc ...)
for the mod hot it is also very efficient and allows quite pushed saturation much garish and can also serve boost.

I use it for 2 years and I love the TS 9 mode that really corresponds to what I play I tried a few models in the same price range with bosses and marshall but really this one which I I most enjoy.
The value for money is excelent level, 50 ca it's really a matter of the more uen pedal very robust.
I could make the election 1000 times if I have the ocasion.
Did you find this review helpful?yesno
»
Read the 14 user reviews on the Ibanez TS7 Tube Screamer »