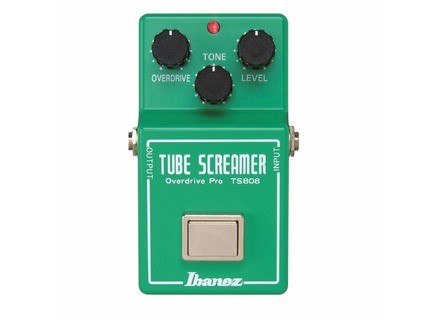 first things first - this is not the kind of pedal u plug in a start banging out metallica riffs on. its a subtle increase of gain that just gives you that little bit extra when it comes to your solos. the tone is perfect! its warm, smooth and will complement anyone playing solos that don't require layers and layers of distortion. after all, stevie ray vaughan used these - and the moment you plug a strat into it you can see why. i use it with everything at 12 o'clock and it still makes me smile 6 months down the line.

the price is pretty steep and yea it looks a little goofy but thats it.

very strong metal construction - this thing can take a beating. hell if u kick enuff cr*p out of it you could always resell it as a vintage.

if you want to 'play every note' then this is the pedal for you. what i mean by that is, its not the kind of pedal Vai would use to do his lightning fast hammer-on cross-taps etc this is the perfect pedal for ppl that like heavy strings (i use 13s) and play everything with the hammer down - without reling on tiny thin strings and a bunch of effects.

think SRV and KWS and you've got a pretty good idea of how this sounds.

Ibanez TS808 Tube Screamer Reissue
3
The Ibanez TS808 Vintage Reissue is a very basic pedal optionwise. One tone knob to adjust the EQ of the pedal, one knob for overall volume, and one knob for the amount of gain, and that’s all you get. If you are a big pedal tweaker this isn’t for you. It’s the tried and true seasick green color, and supposedly uses the same factory, components and housing as that of the original 808 Tubescreame, including the famous JRC4558 chip. The pedal can be powered by 9 volt batter or external AC adapter. Dimensions of the pedal are 4.9" x 2.8" x 2" and it weighs a little over a pound.

The pedal is built very sturdy, with a square switch exactly like the original 808 series from Ibanez. I have never heard any issues with quality control on these pedals like I have the cheaper 7 series that uses a “new” switch design. I wouldn’t worry about this one breaking on you. It’s a very straightforward layout and the knobs seem sturdy and hold your settings well. The housing and jacks are metal and seem like they would hold up to a good amount of abuse.

I compared this pedal against a stock Ibanez 9 Series Tubescreamer, and it won the contest, but only slightly. It is one of the most copied pedals out there, if not THE most copied pedal and honestly some of the clones I’ve picked up does the sound much better. This pedal has a decent sound to it, but I don’t hear a major difference between the two models. It does sound ever so slightly warmer, but it’s not a night and day difference. Like all other tubescreamers, you are going to have that heavy mid hump in the eq section, so if that’s not for you steer clear of this pedal. The tone knob doesn’t let you dial that out. I would not use it for a straight up overdrive with a tele or strat unless I was going after those SRV blues tones, it does that well. It surely cuts through the mix, but it’s a little heavy on the mids for my tastes.

Similar to the TS9, this pedal is built very well and should stand the test of time in the durability department. Unless you like a very midrange heavy overdrive or have an amp that is equalized to handle the pedal, I would only suggest using this pedal as a solo boost into an already overdriven tube amp or for blues rock or other genres or amps where a mid heavy overdrive is useful. I feel this pedal is overpriced and Ibanez is banking on the Vintage Reissue name a little too much. I feel that there are several copies of this pedal that do it’s thing just as well or better for far less money. If a Tubescreamer was the tone I was looking for and Ibanez was my only option, I’d just stick with the TS9. I did not feel there was enough difference in tone to pay the extra for the reissue.

Ibanez TS808 Tube Screamer Reissue
4
overdrive of the most famous, everything has been said.
having a crush on an old ts-9 belonging to a friend (who does not want me to give it a reason) and have been very disappointed with the TS-808 and TS-9 "reissue" I found a little shrill and medium (but not where it should be)
and having bought a maxon OD808, it is closest to the grain of "old", I ended up falling on one that sounded really good, and I agreed immediately!
morality: trust your ears.

why not?
(Drunk these items taxed)

6 of 21 people found this review helpful

AceLeppard's review (This content has been automatically translated from French)" Legendary!"

Ibanez TS808 Tube Screamer Reissue
3
Overdrive pedals analog input jack between one, an output jack output.
Three potentiomtres: Overdrive (rate of gain), Tone (Tone general) and Level (volume effect). It is difficult to rgler prcisment.
A switch on / off, easy to activate but I feel that after several years of use, it has fragilis ...
The pedals can be fed thanks a 9v battery or AC adapter, but the mini-jack format, as some vintage pedals. If you have prvu the adapter is not a problem ^ ^

Gnrale configuration is very simple, the Tubescreamer Schematic became a REFERENCE Contents in overdrive and we can not count the number of copies in circulation on the market !
I bought this rissue used without the manual, but it is by no means essential to meet soon!
The edition of sounds is also rchi simple. Everyone will find their preferences by turning the knobs, for as long as those trsractifs and interactive.

As many know, two uses are possible on a clear sound for a crunch, or to boost a DJ's saturated.
On-clear sound: the pedals gives trs beautiful sounds, as long as we take the trouble to turn up the volume of the amp: indeed, low volume, we feel that more the sound of the pedals is superimposed on the clean. Increase the volume or type of pramp in power tubes amliore rendering, which seems much more natural.
We can thus obtain a crunch crdible trs, trs practice for rhythmic rock or bluesy solos, or grazing a particular passage (break, solo ...)
The reserve of gain is quite limited, however.
Over-saturated sound dj: Fidler's legends, the pedals highlights many harmonics, and provides a great sustain.
Its reputable wants her food low: less than my Boss OD1, more than a Fulltone Ocd example. Rdhibitoire not in any case. This is also part of his characters.
I play with my Start (grain vaughan trsraliste!) To give even more to sustain my Humbuckers Gibson and Epiphone.
I do not use more normment aujourd'ui him prfrant my Boss OD1, brighter.

I prcise that I could never compare with the original rissue or in depth with a TS9 for example!
I use dsormais almost more than my Boss OD1, better able to provide me with grains 80's I need. The characters of this vintage Tube Screamer leads to my mind rather Blues rock or 70's.

I have yet many served c'tait THE FIRST overdrive I had acquired, there are two years. I did not try to normment MODELS, I just heard of overdrive like so magical to boost distorted sounds.
The occasion attracts me, I had had for 100 euros, honest to a TS808.
However, since I know that many pedals ahead dsormais this little green box in its price range: Xotic trs is wrong with his BB pramp, Fulltone OCD with her also, and I m I could be surprised with a Boss SD-1 current, which for fifty euros offers made my ears if moves away from this rissue TS808.

The effects of both drives all DIFFERENT trs, it is important to try and especially to compare them to find one that fits!

Did you find this review helpful?yesno
»
Read the 10 user reviews on the Ibanez TS808 Tube Screamer Reissue »