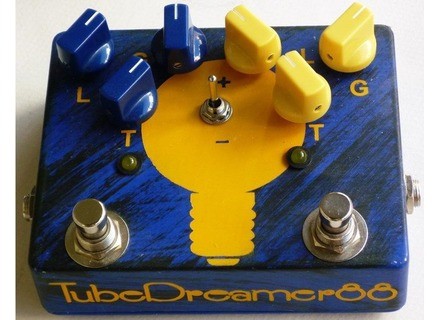 ricoute's review (This content has been automatically translated from French)" Not evil, even in a case rather well Ts58 TS72 & blah blah ...!"

each channel with Level / gain tone and independent switch and can also be coupled together.

Moreover much better because there is a significant difference in gain between the two channels, and it helps equalize when going from one to another.

But we are forced to stop to go to one another, so it is very bein when you want the couple but a little less when you want to switch from one to another.

A mini switch with the ability to cut the channel being in favor of the other channel would have been superfluous ..

analog chip with a vintage old

yes, it turns and it makes

simply put the Ts channel 72 blue buttons is effective and makes good tends to sustain, harmony, tone and gain a high position, completing all
He speaks in the record of a transparent od lamp with its low volume, I do not know what it is!!

for the yellow button Ts58 channel, one is struck by the lack of punch that puts a little roundness and brightness, but I frankly bod blah, and one wonders interest of this channel!

dual channel with separate settings are nice and accumulated 2 + channels the high gain well thought out and very usable.

To nitpick, if it sounds good and the grain is good, it's very classic and does not fall ds the brilliant side of Ts usual, but I would have liked a more distinctive grain and musicality ie a more assertive personality a little more surly what!

the choice of a single tube with the dreamer + ts 58 is enough, but unlike the dreamer 88 allows the mix of 2 channels for just 40 € more then take this as
last!

R / p / q is relatively good, even when high enough for the made in greece.
I have the Waterfall (Chorus) Jam I find decidedly more successful and musical!

I still think I'll make it and guide me to a Death by Audio Interstellar Overdrive Deluxe very typical but with the body and what musicality or Rockett Audio Designs TIM PIERCE OD most versatile.

FAIRFIELD BARBERSHOP the OVERDRIVE is not bad, but lacked gain with simple mic.

So no, I will not repeat that choice, as I move into the above models above.