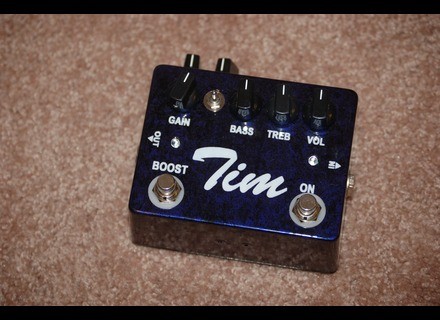 Usability:
This is the big brother of the famous Timmy pedal, and a little more complicated to use. The regular drive section is pretty much identical to the Timmy, controls for gain, volume, treble, and bass. The bass and treble control pots are reversed in this pedal, so they are maxed out when turned completely to the left. A little counter-intuitive, but that is the way Paul makes these.
The boost is really easy to control just gain and tone, but unfortunately it can’t be engaged independently which would have been really useful. The Tim also features an effects loop that engages with the pedal. I’ve never found anything useful to put in there, Paul recommends a graphic EQ.
Note that the Tim is quite a bit bigger and taller, with side mounted boost controls, so make sure you have room for it on your board.

Sound:
The Tim is one of the best sounding pedals currently made, and one of the few that is not some form of modified tubescreamer. It is without a doubt as transparent an OD pedal as you will find. None of the blatant mid-hump that is so commonly found in OD pedals. Rich and creamy OD with just enough grit. While the Timmy is strictly a low-mid gain OD, the boost on the Tim gives it quite a bit of crunch. According to Paul, the Timmy has a gain factor od about 12, the Tim of 10, and the boosted Tim of 30. Definitely not the most touch sensitive of pedals, but it makes up for that in transparency.

Overall:
The Tim is definitely one of the best OD pedals on the market, but that does not necessarily mean it works with every rig. I’ve seen this pedal bring some amps to life and throw blankets over others. Paul is very straightforward that it is not for everyone. But if you are looking for a beautifully built transparent OD from a top-notch builder, this is probably the one.
The waitlist is a little long (about 8 months at the moment), and the used prices on these aren’t cheap. There are a few online stores that bring in batches from time to time (available on Paul’s myspace) which can be a little faster than the official list.
This one is definitely recommended.