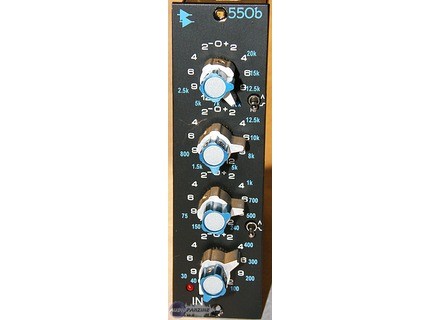 550B, Parametric EQ from API Audio.

Knobs mtal the most beautiful effect, serrated!
but unique choice of + or - 2dB and often a bit too! shame!

Yeah! Bof! I have not keep very long, 6 months to replace Lil freq from Empirical Labs,
In a subtractive do not like it, we quickly remove too much. At any rate, it's pretty rock / blues sound and quite as categorical. EQ is more to add than to remove!
but even in the additive, the pas de deux dB is often too broad,
I am a little hard, because it's all the same EQ and even that sounds very good for certain applications, but more than 1000 euros per channel without the MIDI box!

Good machine, but a little pretentious, in the sense that it should be used for what it can do and not what we need or want to get!
not super versatile, even when there are complex sources that will need a finer EQ!
for the rest, it makes a sound in 2 seconds, or he must go back several times with same numbers of Eq upscale architectural parameter (SSL, Focusrite, Avalon is the ....) opposite!