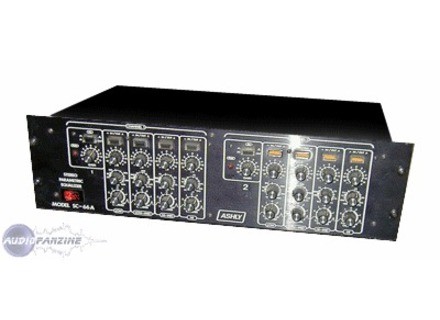 Ashly SC-66A
5
The Ashly SC-66A is a stereo parametric equalizer that I've used in the recording studio. I don't own it and have only used it in a professional recording studio setting, where we made the connections with the patch bay rather than in the back of this, so I didn't have a chance or a need to see what types of connections it has. This is a rack mountable piece of gear and will take up four spaces in a traditional casing.

The make up of the Ashly SC-66A is pretty straight forward and isn't too difficult to figure out on the spot, granted that you know a thing or two about parametric equalizers. Each of the two channels has four bands, and each band has parameters for gain, frequency, and bandwidth. Each also has a in/out button and an overall gain knob with a button for putting it in or out as well. As experienced users of parametric equalizers can see, this is a pretty standard configuration, so a manual is probably only necessary for beginners, if for anyone.

In terms of sound, the Ashly SC-66A does exactly as advertised, as it is easy to cut or boast specific frequencies or sweep across a band of frequencies. For the most part this unit allows you all the control you need, and having two bands is great for using this on stereo pairs or two tracks that are similar. The tone quality is very clean as doesn't color your sound in any negative way for sure, in fact it really just does the job at hand without adding it's own coloration. I used the SC-66A for mostly acoustic and electric guitar, but I'm confident that this will be useful for many applications across the board.

I haven't seen all that much of these around studios, as the one that I used was the only one I've ever seen. Upon first look at it I knew it was something that I wanted to try out, as it really has a cool look and style to it. If you ever come across an Ashly SC-66A to try or buy, it's definitely an equalizer that I'd recommend checking into.

Ashly SC-66A
1
4 analog stereo equalizer bands of the 70s, I do not know, I use it mostly to sculpt sounds very original, it is not very suitable for the modern sound, but that's what gives it its charm
jack on assym
breath, a little Chechen settings, but this is like, no plug can happen to simulate such a thing!

I have had the opportunity to buy a friend without knowing its features, but I certainly do not regret ...

j 'woodstock love his side and pretty breath as it is actually more ...