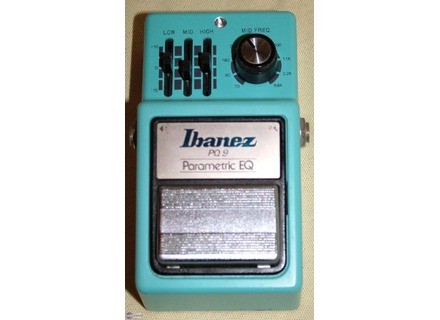 Ibanez PQ9 Parametric Equalizer
5
This is the purple post 1981 edition of the Ibanez PQ-9 Parametric EQ pedal. I believe the first edition had script writing, the second edition which is the one I reviewed looks like your standard TS-9 Tubescreamer box and then they released a later one in a plastic casing.

I found this at a Guitar Center. It was used and just brought it as a trade. It was heavily beat up, but looked like it was worth trying out, so I did and really enjoyed it. For $40 I couldn't say no. I mean these for at least double that on Ebay.

The PQ-9 is a simple easy to easy parametric EQ with a 3 band EQ, Treble, Mid, and Bass. To the right is a variable midrange EQ knob which is what makes the pedal unique and versitle. Give a Strat more lows, give a Les Paul more top end sparkle, a great pedal!

What's not to like? The pedal is 30 years old and still working great! I didn't notice any unwanted noise and it clicked over smooth.

If I could change one thing, I would have made a bigger or brighter LED light. With a battery specifically a dull battery it is hard to tell if the pedal is on or off.

Solid. A nice metal case. I could tell it was abused and neglect. Plenty of paint scrapes and it still works great.

A weird, quirky pedal I never saw before, but it is well worth it. I don't know why these haven't caught on or have been reissued? Maybe someday.