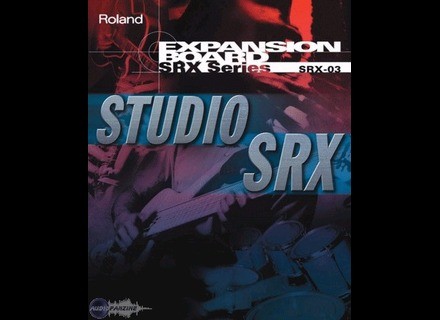 gnoulie's review (This content has been automatically translated from French)" Exceeded, largely surcôtée"

Roland SRX-03 Studio SRX
2
About a month of use on a Fantom X7.
I would say that this type workstation, tops in its release in 2004, the provision of SRX (at least thereof, general) is almost zero.
In my productions, I try to use the sounds, but I come to the end each time, to the internal waves X7, more dynamic. That's the problem with this card is the number of velocity layers per wave 2 at best, which affects the expression. A priori, given the limited number of patches associated with this card, one would expect a better definition, but this is not the case (which does not portend better performance for other existing SRX).
It takes almost nothing to Fantom X, much better armed (3 velocity layers for the EP and other waves, 4 for the AP!). 150 Euros for not much, it is a small price to pay.
Besides, when you think, where else have you seen that electronic equipment (in addition to the field of computer or digital music, the development runaway) is still side occas almost half of the new price, 14 years after its release?
It will, at best, a facelift to older bikes accepting SRX.
Otherwise, some positive points in absolute terms, notwithstanding obsolescence:
- Beautiful samples of some wind instruments (flutes in particular), cool in the attacks
- Kits with similar dynamics Fanx, but more importantly, and this is the only real contribution of this map, some additional percussion

Roland SRX-03 Studio SRX
4
Used for 7 years. No problems with installation and use. I have many other SRX. This is the most versatile SRX. Indeed, it is not intended for instruments or a particular style. It brings a bit of everything, basses, guitars, flutes, organ, electric piano, trumpet, ...

128 patches but only with good expressiveness. The sound velocity varies. 12 drum kits for not investing in the SRX-01 that does not bring anything extra to the styles.
The price / quality ratio is very good. So I would do the selection of this map.

To do this a sound idea, here's the demo:
https://www.rolandus.com/flash/demos/srx/index.html

VinceBlood's review (This content has been automatically translated from French)

Roland SRX-03 Studio SRX
4
This expansion card Roland uses the principle of the card-Session SRJV group consisting of an array of small but quality instrument treats.

The emphasis is on style Jazz electro as can be seen on BMD.

Among the most interesting sounds have noted an acoustic piano rock typ trs exploitable, a stro really nice piano duet, a chorus of children trs convincing, a steel drum solo (rare find) ralistes flutes some of which are not common (typ jazz, ethnic), synthetic pads interesting.
The drums are trs well, however the battery, yet caring, is difficult to use because too hlas type.

The dceptions turn to the trumpets trs little convincing.

Conclusion:
Trs a good map with a constant quality.