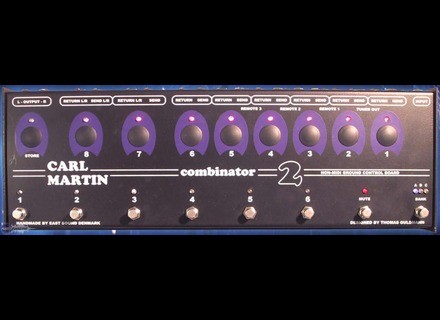 the combinator 2 n not damage the sound of pedals, or signal

I like this answer carl martin directly as well as a topic on the forum spécalisé guitariste.com

"It's a matter of impedance, high impedance HAS thesis pedals output, this HAS to be converted to low impedance.

CM HAS Buff Deluxe Which is two buffers in one pedal, the trick is to Have a buffer in series with the pedals out to the loop return.


this is not practical at all, and you wonder why AC was conceived as ca

the solution is as shown in the loop to put the pedal to saturation after a 2nd pedal in lieu of buffer. and there is no longer problem

be noted that the combinator works perfectly, no noise in the switch
and that it allows to switch 3 channel amp thanks to three loops 1eres that the two roles (ie if s can be used in a channel pre amp ca also activate the pedals of the loop too. otherwise should not put of this loop pedal)

Carl Martin Combinator 2
2
Routing pedal for 8 effects loops, useful for those who are tired of tap dance
The pedal is no longer manufactured it is replaced by MK2 Octaswitch the difference is this:
The levels of food, Combinator has a built-in power and can power eight 9v pedal while octaswith does not have an integrated power supply cable, for it was against a stack location 2x9V
3 + 1 external output tuner output against two external output for Octaswitch
18 presets (3 of 6 presets bank) against eight presets and 2 presets for external output on Octaswitch
6 switch to mute the loops + 1 + 1 selection against 8 presets for loops and a switch to mute octaswich
The mute the biggest weakness is not true bypass unlike Octaswith what makes all the difference and I think especially the Combinator tended to alter the sound of some pedal ... and there is way
The advantages of the octaswich, the button to the buffer on / off
Pedal resold without regret not against I do not understand it can be found at 300 € Used knowing that the pedal is the new bradait to 190 €

Carl Martin Combinator 2
5
I use it for one day and I'm pretty happy with this purchase!
The dancer is no longer with the pedals is a comfortable on stage énormissime.
What is very significant is being able to control the channels of amp with this beast!
It is robust, inspires confidence and is very easy to configure.
The only problem is that once you use the remote 1, 2 or 3 channels to drive the amp head stupidly well we lose an effects loop, but not crippling damage. Oh and when you move from one switch to another There's a very very very slight "plop" on my part but it is not a problem either, remains to be tested to see live.
Another thing strange: plugging in my guitar through the combinator I feel that my saturation (I have an ENGL Fireball) is even more embellished as if it has gained heat with a very slight compression. It's really nice.
Only model tested that I bought for 250 euros OCCAZ like new on eBay!! (It's nine in the vicinity of 500 euros)
Well considering the price I paid, I made rather a matter so sacred quality / price ratio very good.
I would do this choice opportunity.
Did you find this review helpful?yesno
»

vice's review (This content has been automatically translated from French)

Carl Martin Combinator 2
5
I own the combinator 1st version is identical to the combinator set aside two banks 1,2 & 3 and mute, but this is not a handicap he has 8 loop with each feeding .

The device can be housed in a large pedalboard without a problem, mine is 70x40 and I was able to accommodate 10 pedals at ease with the Combinator, the paramettrage is done in the blink of an eye with a can imagination one can pedal and inserted a series of unlimited plus loop either by placing them before or after the entry input for my part I programmed a volume pedal in the loop and the last place I still pedals modulation before following the style of music or group in which we play (a concept not even need his forcémlent another) AC proves a very useful and very powerful, the power supplies are designed for pedals carl martin with a higher impedance one can therefore lends itself to the pedals exit 9 & 12 volts without problem ..

It is a veritable tool that allows scene not to bother or missing sound on stage, I was recomande all those who are tired of tap dance and do not want work with the pedalo.

I put 9 because perfection does not exist but the heart is ..