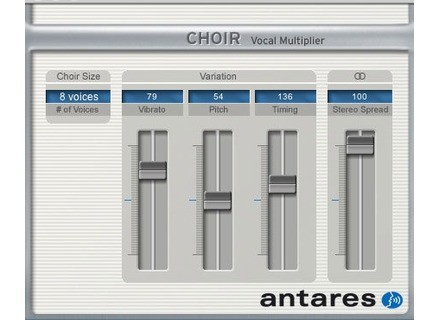 All user reviews for the Antares Audio Technology Avox Choir

Antares Audio Technology Avox Choir
4
Antares Systems Avox Choir is a voice multiplying effects plug-in that comes within the Antares Avox bundle. It cannot be bought as an individual plug-in - at least not that I know about. I didn't have an issue installing the plug-in bundle, as it only took a short while and was easy to do, as is normally the case when installing plug-ins - just make sure you have everything going to the proper places. As far as using the plug-in itself goes, the interface is quite user friendly and is for the most part self explanatory. The main parameter to control is the number of voices that you'd like to have, which ranges from 4 to 32. There are a series of sliders to control including those for vibrato, pitch, timing, and stereo spread. I don't think that a manual is necessary unless you're having installation or technical issues.

In general, the Antares Systems Avox Choir plug-in is one that won't take up very much of your processing power. I don't have this plug-in on my current system, but I used to run it in Cubase SX with a MOTU 896 HD audio interface. The computer was a Hewlett Packard Pavilion dv8000 lap top with a 3.0 Ghz processor and 2 GB of RAM. While this is definitely a plug-in that I used rather sparingly, I never found it a trouble to run as many as I needed in this configuration.

When it comes to the sounds that you can get with Antares Systems Avox Choir, it is somewhat of a mixed bag. For more subtle applications of the plug-in, where you don't use as may voices and don't go crazy with the parameters, you can definitely add some thickness to your voice sound. I didn't really like using this on a single voice, rather I found it useful in situations where I already had a few voices down and wanted to add upon it even further. I found that the more voices you added, the more unrealistic it started to sound. Since you can buy Choir on it's own, it is kind of an all or nothing situation with the bundle, so I'd recommend that those interested in this one check out the other plug-ins in the Avox bundle to see if the bundle as a whole is something that will be useful for you...
View price information
Did you find this review helpful?yesno
Cookies help us improve performance, enhance user experience and deliver our services. By using our services, you agree to our use of cookies. Find out more.