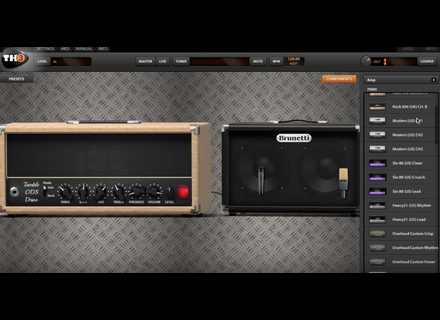 TH3, Software Amp Simulator from Overloud in the TH series.

It only took me very little time to jump on it when I got the email from Overloud announcing the release of TH3.

I can easily compare both TH2 and TH3 since I own both (well, almost: my TH3 is a 15-day free unlimited version) and I'll tell what I perceive as the good and not-so-good points of this new version.

- Easy to use from the beginning, quite intuitive and as easy to use as TH2
- Sound appears more precise, cleaner and of a better quality than the previous version
- Cab sounds seem wider and more diversified, with a better response to mic placement than was the case in TH2
- Original presets are more varied and different from those in TH2
- Great new stompboxes (such as a new, ISP-like smart noisegate)
- Finally, pedals and amps look different from each other AND have a look reminiscent of their original counterparts
- Ability to import TH2 presets (caution: sound is slightly different)
- More bass-dedicated gear
- Integrated multi-layer looper and metronome (better for recording)

- A more precise sound also makes it more difficult to get a natural, organic sound, which won't serve some playing styles
- Some new effects are either useless or gimmicky (an emulation of another emulation with bad-sounding effects)
- The multi-layer looper doesn't seem to be moveable, it's impossible to put it before or in between effects: hence, no way to use it to record a track then play it to adjust your settings
- No more copy/paste function
- No more possible to change the background
- No "minimap" for a global visualization of the whole effect chain
- That's quite subjective, but I really prefer TH2's matrix-like preset organization compared with the way they are aligned in TH3. There's a great loss in visibility, especially when you have tons of custom presets.
- Some freezes and choppy sound problems when launching some of the presets

In a nutshell, I'd say TH3 has a neater sound that fits better modern playing styles and all sorts of rhythm guitar sounds. I have already to get farther than the (already heavy) sounds I had managed to get out of TH2 - and yet, for that matter, TH2 already delivered quite heavy yet precise tones.

With the current upgrade promo (at 79€ instead of 99€), it's a hard choice to make... I find the evolution to be quite noticeable but not a real revolution, there are new features but also new flaws. What a dilemma - wish they would provide us with a mix of both...
Did you find this review helpful?yesno
»

Published on 06/10/16
Overloud has released version 3.2.0 of their TH3 guitar amp simulation software and plugin, which is a free upgrade for all TH3 registered owners.

Listen to the 26 audio files about Overloud TH3 »

Overloud TH3 manuals and other files