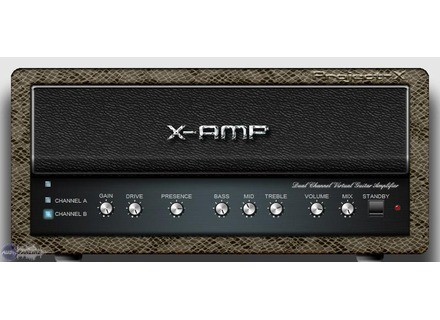 stompboxjon's review"Not bad to be free, the distortion is muddy though"

Project-X X-Amp [Freeware]
3
Project X amp was a freeware plug in that I downloaded back in 2008 after hearing some of my fellow musicians talking about it. The speaker sim is very good and you can do a lot of things with it but the distortion sounds didn’t appeal to me because I felt like they were very muddy and it was hard to get the sound that I was looking for compared to some of the other amps that I was working with at the time it was so much more difficult to achieve the sound that I wanted to get.

The distortion was what made me not want to use it much because it was very muddy and not my style. It would take me a long time before I could find that “sweet spot” for my lead guitars. Working with it was pretty simple though, the interface and the knobs are all easy to tweak and change. It did not come with a manual and I really didn’t need it because of a basic understanding of working with these styles of amps. I would not download this again mainly because, after working with Amplitube this will not cut it. It is a great plug in to have if you do not have money to purchase Amplitube or one of the other higher end paid plug ins. Or if you want to spend a lot of time getting a good sound and tweaking knobs then it may be for you. I just would much rather use Amplitube!
Did you find this review helpful?yesno
»

Project-X X-Amp [Freeware]
5
Too bad all these wonderful things are not dveloppes,
also for mac!

Ben, see 2 /
it is for me to crack ouh, ouh
Did you find this review helpful?yesno
»

Delirious's review (This content has been automatically translated from French)

Ben no pb either, it is not normment resource ...

It's free, OK. But for me it is its only advantage. I find its really not natural ... It has nothing to do with a real amp simulator, such as Line 6, IK Multimedia, Native or instruments. At the limit we can play with, but for a project seriousness, drop ...
Did you find this review helpful?yesno
»