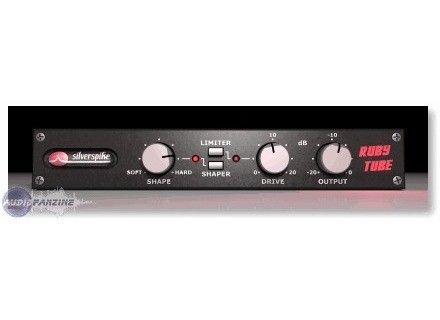 Silverspike RubyTube [Freeware]
5
Ive been using this on fl studio for many years and recently my vista computer froze up and had to be reset...I'm very glad I was able to find this vst for windows 10...sometimes finding certain old apps can take some searching....I use this along with vocal magic pro, another nice freebie...ive never had a single issue with Ruby Tube, it will fatten up what ever you run through it whether its vocals, guitar or whatever.....this time I will put a copy on my google drive for backup purposes.

Silverspike RubyTube [Freeware]
4
The SilverSpike RubyTube does a great job of duplicating the sound of some of those popular preamps from many years ago. This plug in is a freeware that can be downloaded directly from SilverSpike’s website and works great on Windows systems. When it comes to freeware plug ins I am always skeptical because a lot of them are not tested well before they are released and can cause major errors in a DAW and will have to be uninstalled. I had no issues installing RubyTube on my Laptop running Windows Vista and Windows 7 though it does run better on Windows Vista, for some reason on Windows 7 it runs a little slower taking a little more time to open after it is added to a channel.

I love using RubyTube on drums and bass instrumental, it gives a warm tone and some amazing compression that most standard plug ins that come with programs like Cubase and Ableton cannot accomplish. I have been using RubyTube for over a year and it has never caused me any problems. I have also used Reverb it and Tape it from SilverSpike and those plug ins are also very good as well.

Being that it is a freeware I do not think that it is updated that much if any at all because I have not seen any updates for it. This plug in is great, but if you remember back when those real tube preamps sound, or get a chance to work with one in a real studio you will see how much better they still are than this plug in from SilerSpike. That is because there is no way that it can create the exact sound that the originals had but it does a great job of getting it close. It is just not as warm; I definitely recommend downloading this and if you do not like it you can always uninstall. It is free!
Did you find this review helpful?yesno
»

Silverspike RubyTube [Freeware]
4
Silverspike’s RubyTube plug-in is a freebee that’s just available for Windows platforms as a VST plug-in. I don’t have a system where I can run this anymore, but when I did it was a nice little free plug-in to have. I don’t remember much at all about the process of downloading and installing it as it was a while back now. However, as long as you can find a spot to download it and you have proper compatible happening, you should be all good to go. Using the plug-in also shouldn’t prove to be too hard, as there’s just a few simple parameters to be aware of. These include knobs for shape, drive, and output, as well as buttons for a limiter and shaper button. It’s really that simple as just playing around with it for a few minutes should give you a good idea of what it’s all about. There are decent enough presets to get you started if you want to go that way as well. I don’t know if a manual ever was made for this one…

While I was running the Silverspike RubyTube plug-in, it was in Cubase SX 2.0 and later in 3. I had a Hewlett Packard Pavilion dv8000 lap top which had a 3.0 Ghz processor and 2 GB of RAM. I’m not running it any more since I’ve had Pro Tools for a few years now which it’s not compatible for unless you’re running it on Windows and with a VST to RTAS plug-in wrapper. For those who can actually run it, I don’t think you’ll be experiencing much performance issues since it takes up a very low amount of processing power.

The Silverspike RubyTube [freeware] is a pretty early on VST plug-in that aims to emulate the sound of tubes. Of course this is no easy task, and while plug-ins have gotten better, when this was issued it really wasn’t too close. That isn’t to say that this plug-in can’t be helpful to you – just don’t expect it to be a replacement for getting real tube warmth. It’s fine for adding a bit of body and thickness to your sound, as I used to use it mostly for vocals even though it’s suitable for any instrument or voice. Not too many will be able to run this, but if you have a properly compatible system, it’s one that you might as well try for yourself if you’re at all interested…
Did you find this review helpful?yesno
»