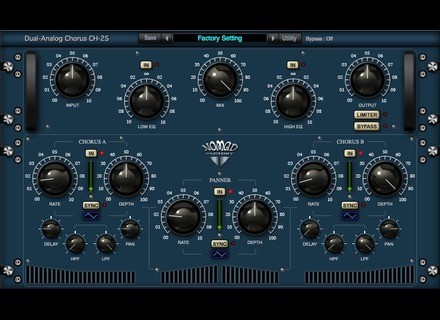 Nomad Factory BT Dual-Analog Chorus CH2S
5
The Nomad Factory BT Dual-Analog Chorus CH2S is a plug-in for your DAW that is one of six in the Blue Tubes Effects Pack. I don't think you can buy this as an individual plug-in, but I'm not 100% sure on this. The plug-in is pretty in depth and unique because it's got two separate LFO's, hence the name 'Dual Chorus.' Each of the two choruses has parameters for waveform, rate and depth, as well as delay, panning, and a high and low pass filter. It has it's own panning section with rate and depth as well as further overall control with high and low EQ control, input and output levelers, and an overall mix parameter. Lastly, it has a built in limiter button for light touching. As you can probably tell, there's a ton that can be done with the plug-in and is one of the only kinds of it's type that I've seen in terms of having two separate choruses in one. I'm unaware of what the manual might offer.

Sine I don't own Nomad's Blue Tubes Effects Pack, I'm not running the Dual-Analog Chorus CH2S at home, but rather have used it a bunch at the studio where I'm working. All of our systems our Pro Tools HD, with the main system I've used it on having a Mac Pro desktop computer with 10 GB of RAM and dual 2.66 Ghz Intel Xeon processors. This isn't a great judge of how well the plug-in runs, as we never have issues running plug-ins. I would think that as long as you're comfortable in running your DAW, you should be okay with this plug-in.

The Nomad Factory BT Dual-Analog Chorus CH2S is a great plug-in to have for anyone's DAW. It's more than just your average chorus plug-in as it's got dueling LFO's for further possibilities and thicker sounds. It's the chorus plug-in I love to mess around with at the studio and definitely wish I had it at home. If there's a sound that I get with it that I can't live without, I'll print it right then and there, but most of the time I like to wait until mixing. The Blue Tubes Effects Pack is an overall awesome and very inexpensive bundle of plug-ins that's well worth considering for any DAW owner.
Did you find this review helpful?yesno
»