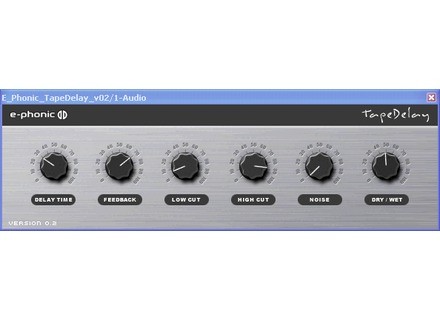 E-Phonic Tape Delay
4
E-Phonic's Tape Delay is a free VST plug-in that I believe is compatible on PC systems only. I don't know this for sure, but when I ran this plug-in it was on a PC and I've never tried to run it on my current Mac based system. It has been a while since I was downloading and installing this plug-in, as it's been a few years since I've used the plug-in at all. I don't remember ever having any issues with it in terms of either downloading or installing it, so as far as I know as long as you have a compatible system you should be set to go. The make up of the plug-in is also very simple, as it is a plain looking interface simply consisting of a few different knobs to control your sound. These parameters are for delay time, feedback, low cut, high cut, noise, and wet/dry (mix). There isn't anything strange or really unique about the plug-in, so pretty much all users will be able to catch on quickly while using it. I don't know if a manual was ever made for this plug-in, but I would think that one probably wasn't.

I don't have the E-Phonic Tape Delay plug-in running on my current system since it's isn't compatible with this plug-in, but when I did run it it was in Cubase SX 2.0 and 3 on a Hewlett Packard Pavilion dv8000 lap top with 3.0 Ghz processor and 2 GB of RAM. I didn't run the plug-in in any other DAW's, but within the aforementioned system this plug-in ran pretty flawlessly. I never tried to max it out or anything like that, but I can't say that I remember ever having a problem running the plug-in. It's free so there isn't any harm in downloading it and trying it out for yourself.

While the E-Phonic Tape Delay doesn't sound like 'tape delay' really, it still has a decent enough sound that it's worth using in lower level DAW's, especially considering that it will cost nothing to you. It's easy enough to use for all users on all levels, so I'd definitely encourage those who are new to the world of DAW's and plug-ins. It isn't the most realistic sounding delay by a long shot, but it's good enough sounding for a free plug-in that I'd recommend at least checking it out for yourself. E-Phonic has a couple of good sounding plug-ins for free, so definitely do yourself a favor and check them out.
Did you find this review helpful?yesno
»