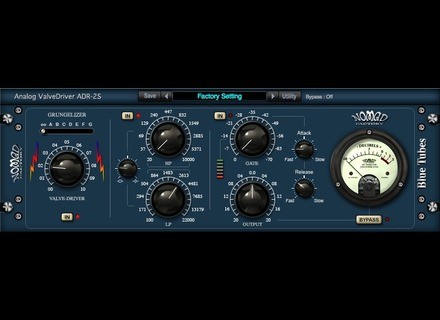 Nomad Factory BT Analog Valve Driver ADR2S
4
The Nomad Factory BT Analog Valve Driver ADR2S is a saturation/overdrive plug-in that is part of the Blue Tubes Effects Pack. It's one of six in the bundle. I don't own the bundle or the plug-in individually, so I can't speak first hand on the installation or authorization processes. However, it's not too hard of a plug-in to wrap your head around. The main parameter it has is for valve driver, which is essentially the amount of saturation you'd like. It then has a slider for eight grungelizer modes and controls for both a high and low pass filter. Lastly, it gives you parameters for gate, attack, release, and output, so it does have a pretty nice collection of controls. Everything should be more or less self explanatory, as not too many of the parameters are out of the ordinary, so I don't think a manual is necessary.

At the studio where I work, the Nomad Factory BT Analog Valve Driver ADR2S plug-in is running on all of our systems. We have a number of Pro Tools HD rooms on site, but the main room is where I've used it most, which is on a MacPro desktop that has dual 2.66 Ghz Intel Xeon processors to go along with 10 GB of RAM. This has been enough to run this plug-in more than comfortably as I've never had a problem with it or any of the other bundles in the Blue Tubes Effects Pack.

While not the most effective saturation plug-in that I've used, the Nomad Factory BT Analog Valve Driver ADR2S is still a nice little plug to get within the context of the Blue Tubes Effects Pack. The bundle is mostly full of more traditional effects, so this is the only one of it's kind included in the bundle. While I always think it's best to do this kind of processing with true analog gear, when that's not possible something like this can often beef up your sound a bit, although not nearly as convincingly. I'd say that this is the least used plug-in in the bundle by myself, but have used it a few times effectively. It's not worth the full bundle or buying it individually (if possible), but if you like the rest of the bundle it's a nice addition for sure.
Did you find this review helpful?yesno
»