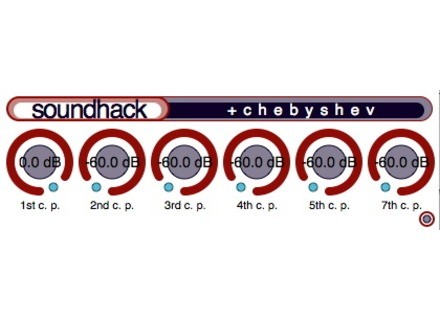 Soundhack + Chebyshev
3
The Soundhack + Chebyshev is a free plug-in that is part of Soundhacks' freeware bundle of software. Chebyshev is a unique distortion plug-in that aims to add harmonic distortion using chebyshev polynomials. I'm not 100% clear on what this actually entails, but as far as I can tell it's like using a number of processors at once in series. You can download this free piece of software along with the others in their freeware bundle directly from Soundhacks' website. The plug is available in VST, RTAS, and AU formats for both Mac and PC operating systems. The interface of the plug-in isn't hard at all to follow, as it's got a series of six different chebyshev polynomials to add harmonic overdrive in different places. A manual isn't really necessary, as just playing with it for a minute or two will give you a good idea of what it's all about.

Right now I've got the Soundhack + Chebyshev and their full freeware bundle running on my system at home. This system consists of Pro Tools 9 and a Mac Book Pro lap top computer that has 4 GB of RAM and a 2.2 Ghz Intel Core 2 Duo processor. I don't think it's possible for a plug-in to take up less processing power than this one. If you're in doubt at all, just try it for yourself as it's free!

While worth having around since it's free, after initially using the Soundhack + Chebyshev plug-in, I must be honest in saying that I haven't used it much. It's definitely a cool concept for a plug-in, but for me it doesn't do all that much. It can warm up your sound a little bit, but often it seems to do more harm than good. To me, if I'm after some harmonic overdrive, the only way to do this is by using real tubes. Like I said, it's free so you might as well give it a try for yourself, but I personally don't see myself using the Soundhack + Chebyshev harmonic overdrive plug-in too much in the future...
Did you find this review helpful?yesno
»