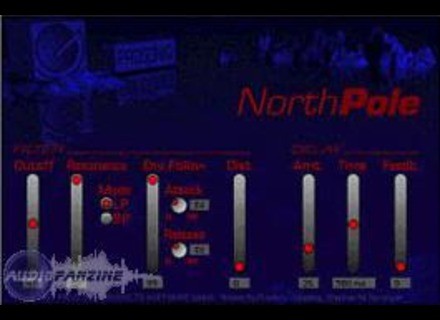 Prosoniq Northpole [Freeware]
3
Prosoniq's NorthPole is a filtering and delay plug-in that is available free in a number of different plug-in formats. I no longer run this plug-in, but when I did it was in Cubase SX. I now run Pro Tools instead of Cubase and never felt I needed to add this to my Pro Tools suite. I don't remember installing this plug-in, but I would probably remember it if I had a problem with it. The configuration of the interface is very easy to follow - it's broken into sections of sliders for delay and filters. The filter section contains sliders for cutoff, resonance, envelope follower, and distortion, while the delay has those for amount, time, and feedback. Those are all the parameters that one would need to know about when using the NorthPole plug-in. I don't believe that a manual is necessary - if these parameters are unfamiliar I'd recommend doing some research on what they do as I don't even know if they make a manual for this.

When I was running the Prosoniq NorthPole plug-in, it was in Cubase SX 2.0 on Hewlett Packard Pavilion dv8000 notebook. I was running the VST version of this plug-in, but I believe that it is also available in AU and RTAS as well, so I guess I could be running this in Pro Tools, but I don't really see a need for me to have it as I don't think that I would use it too often. It isn't going to take up too much of your processing power, but since all systems are different I'd recommend just downloading and seeing for yourself. I first used the plug-in about five or six years ago.

In my time having the Prosoniq NorthPole plug-in in my Cubase plug-in suite, it wasn't a plug-in that I used too much. I tried it a bunch of times and it really didn't do anything for me. Perhaps I could mess around with it today and it would be different, but I haven't been motivated to try because I really just remember this being pretty lackluster. It will do as advertised I guess in terms of filtering your sound, but it just doesn't sound all that good to my ear. Again, if you're at all interested, the plug-in is free and comes in a variety of formats so you might as well try it!
Did you find this review helpful?yesno
»

tedw@rigo's review (This content has been automatically translated from French)

Prosoniq Northpole [Freeware]
5
Northpole is freeware home Prosoniq for Mac and PC. APRS Tlcharger have just the dzipper (http://www.winzip.com) and copy it to the directory of VST plugins.

The manual is in English, clear.

NorthPole is a filter Fully programmable rsons that simulates the behavior of an analog filter 4 poles. The sound is awesome, handling is efficient trs.

The plugin is not gournand. It works well trs. The buttons do not have the design of Emagic plugins, but it is doing.

I use this little plugin for two years. It is lightweight and cool. It is his place, he's a pariculier.
Freeware try at http://www.prosoniq.com

You'll like it, even to the rock ...
Did you find this review helpful?yesno
»