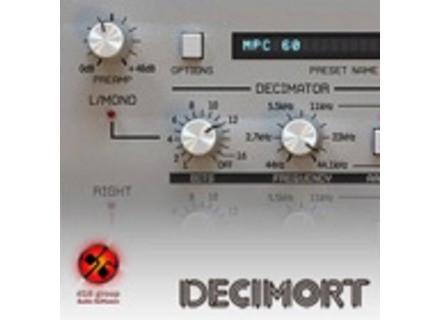 D16 Group Decimort
5
I use an Intel Macbook and there has been no compatibility issues.  As for a manual, I have never needed one because the Decimort is a very simple device.  There are quite a few knobs to twist on this guy, but it all makes sense.  And even if it doesn't, twist them and listen to the effect it makes, and you'll get it.  Because of all that, the general configuration and setup is a breeze.  The typical functions are easily accessible as they are all right on the front face.

I have used this plugin in Logic 8/Mainstage 1, Logic 9/Mainstage 2 and Ableton 7/8 and this unit works correctly in all of them.
The only stability problems I seem to be having of late is Ableton 8, it occasionally crashes (once a week it seems), but I don't believe this plugin has anything to do with it (AB 8 crashes whether its there or not).  Other than that, I don't experience any stability issues.
The performance on this plugin is amazing.  I used the bitcrusher on Logic often before I got this little guy.  Once I opened this up, I have never used the Logic 9 option ever again.  I give this a 10 out of 10.  The idea of this thing is to degrade the quality of the sound as well as distort it, which it does, but it makes the degradation sound amazing, as if I were doing it with an analog device.  I have been using this plugin for about two months.

What I like most about this device is its excellent sound quality.  I know that sounds weird because this device is supposed to make it sound bad artistically of course.  But, anyone who wants raunchy dirty sounds knows there is a difference between crappy and "bad."  This makes things sound "BAD."  Take a vocal track and run it through this and you will think you entered an underground punk show in some dirty bar in Europe.  Also, the presets are really nice to get you started, especially the drum presets.  There isn't anything that I don't like about this plugin, it does what it says it does and it does it well.  I think my studio partner paid a little over $60, which is a great deal.
I have tried others including Logic 9's built in unit, but this one kicks their asses.
Yes, I don't ever want to be without the decimort, I use it too much.

D16 Group Decimort
5
Trouble-free installation and authorization very "user friendly".
Decimort's goal is to degrade the sound so as artistic as possible.
We first level preamp, which does not increase the volume, but the rate of distortion. The following settings can be made separately for each stereo channel, but can also apply settings only "right way" to both channels (button "Link Params"). We start with the "Decimator" wherein conventionally can reduce the number of bits and the sampling frequency. It also has a button that activates the low-pass filter anti-aliasing to eliminate the phenomenon of "sampling reflection." Part II: the filter section. You can apply a filter to choose: Low-pass, band-pass, high-pass or band-reject, with adjustable cutoff and resonance. It can decide if this occurs before or after filtering the "decimator". Finally, it's all set to "dry / wet" and output volume. All parameters are controllable via MIDI with "MIDI Learn".
You get 42 factory presets and a small 20-page manual in French, which is especially useful for how to save our presets.

Before discovering this plug-in, there are three and a half years, I did not like at all "bit crushers." But Decimort convinced me that we could get something interesting with this type of effect, and it is really the only of its kind that has been through my ears. In fact, I generally used in small doses eg "trip-hopiser" a loop of drums. I made a preset that suits many situations: a bit of preamp / 12 bit / 22 kHz / no anti-alias low pass filter and 10 KHz. It can work on all kinds of sounds. But we can also go further and try special effects (such as the effect "phone" on the voice, for example.) In fact, Decimort actually provides sound degraded but pleasantly, where most competitors offer too purely numerical result. D16 still a very good effect for a very reasonable price. I would do this choice!