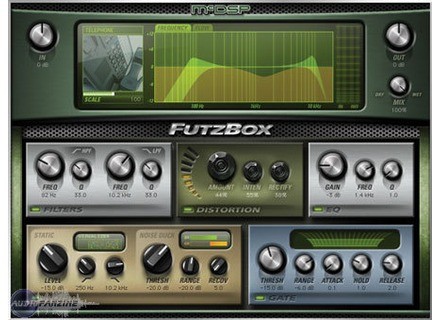 McDSP FutzBox
5
The McDSP Futz Box was easy to install without any problems or issues. I had the plug-in up and running soon after I had it and there were no compatibility issues whatsoever. The interface of the McDSP Futz Box is very easy to follow and understand. It is split up into a few different sections to allow you to lo-fi your sound. There are sections for filters, distortion, EQ, gate, leveling, and noise duck. There is then a graph and knobs for overall input, output, and mix level. I don't have a manual for the McDSP Futz Box, but it is easy enough to install and use that you don't really need it.

I am currently running the McDSP Futz Box on a Mac Book Pro that has a 2.2 Ghz Intel Core 2 Duo processor and 4 GB of RAM. I run this plug-in in Pro Tools LE 7.4 that runs off of a Digi 002 rack audio interface, and with this configuration I've never had a problem running this plug-in. While I don't use too many of these at once because of the nature of the plug-in, I've never had a problem running a few of these at once when I wanted to.

I've been using the McDSP Futz Box for about a year and have found it to be one of the better lo-fi plug-ins out there because of the great versatility that it has. Since it has a variety of sections, its capabilities are pretty wide and it is somewhat easy to zero in on the sound that you are trying to achieve. The price of the McDSP Futz Box isn't too expensive for the native version, but unless you think you might use it a lot, it might not be worth it for the small home studio owner. If you want a lo-fi plug-in but don't want to pay for something that you might not use that much, I would recommend downloading Izotope Vinyl over this simply because it is free. This being said, the McDSP Futz Box is a great plug-in on its own and is definitely worth a try for anyone looking for a lo-fi plug-in.
Did you find this review helpful?yesno
»

Published on 02/11/16
This February, McDSP offers its Futzbox plugin at half price.

View all 5 videos of McDSP FutzBox »