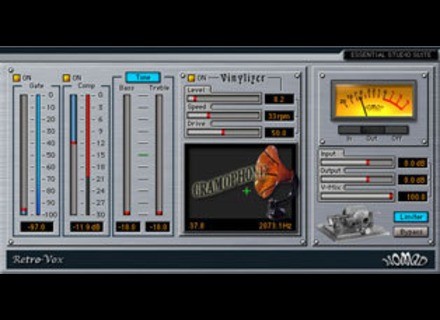 Nomad Factory Essential Retro Vox
4
The Nomad Factory Essential Retro-Vox is a plug-in that is a part of Nomad's Essential bundle of plug-ins. This bundle is inexpensive and offers up nine plug-ins in total including this one. I believe you could buy this plug-in individually, but it looks like it's probably worth it to buy the whole bundle if you're interested in one. I installed the entire bundle of plug-ins at once, along with a number of other Nomad Factory plug-ins. I didn't have any problems at all doing this, as it was quick and painless. Learning how to use this plug-in in particular was pretty easy. It shares a similar looking interface to the rest of the plug-ins in the bundle, which is laid out nicely and isn't convoluted at all. It's got some basic parameters via sliders for a gate, compression, and treble and bass EQ control. In then has a 'vinylizer' section where the damage is done, giving you control over the level, RPM speed, and drive level. Lastly, it has input, output, and vocal mix overall controls. It's certainly not a hard plug-in to use, so I wouldn't think that a manual would be necessary.

Right now I'm running the Nomad Factory Essential Retro-Vox on my system at home, which consists of Pro Tools LE 8 and a Mac Book Pro lap top. The computer has 4 GB of RAM and a 2.2 Ghz Intel Core 2 Duo processor, while I'm running Pro Tools with a Digi 002R audio interface. This configuration has been more than adequate for running this plug-in, especially considering that I've never had a need to have this running on more than one track at once. Even if I had to run a few more I definitely could, as it's not the kind of plug-in that will bog your system down at all.

While the Nomad Factory Essential Retro-Vox plug-in is definitely pretty cool, I wouldn't have bought it if it wasn't in the Essential bundle of plug-ins since I really don't use it all that much. It definitely does as advertised, as it's great for turning your vocal sound into some lo-fi goodness. The main reason that I wouldn't buy this plug-in on it's own is because iZotope has a very similar plug-in for free called Vinyl. It's got a very similar make up and sound, so if you're looking for a vinylizer sort of plug-in, I'd go with that one before this. Having said that, if you're looking at the Essential bundle anyway, this is definitely a nice addition to add to the suite.