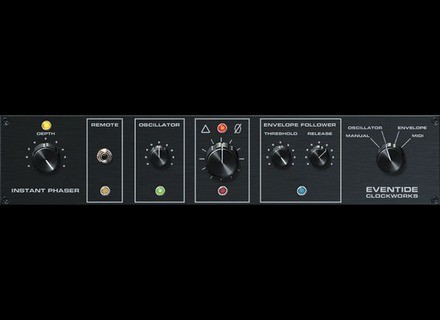 Eventide Instant Phaser Plug-in
5
The Eventide Instant Phaser Plug-in is a software emulation of the classic hardware version of the same name. Since the studio that I used the plug-in at already had it installed, I wasn't involved at all with this process. However, I haven't heard about any compatibility issues or other problems related to the plug-in at all. The interface of the software is generally easy to figure out and understand, even if you don't have experience with the original Instant Phaser. The parameters that you have to work with here are depth, oscillator, shape, threshold and release under the header of envelope follower, and a mode knob. Nothing about using the plug-in is hard, so a manual is needed unless you're having a problem installing it or something like that.

Since I have run a TDM version of the Eventide Instant Phaser Plug-in on an HD system, I haven't had any issues related to performance. Also consider that I've only had a need to run at most two or three instances of this plug-in within a single session, since it isn't the type of plug-in that I used very often. Even if you have an LE system or something similar, I don't think that this plug-in should present too many problems in terms of how well you will be able to run it. However, since everyone's system is different and how well a plug-in will run really just depends on this, until you have the plug-in on your system it is hard to say for sure how well it will run.

The Eventide Instant Phaser Plug-in is included in the Eventide Anthology II bundle, and I'm not sure about its availability outside of this bundle. I can't compared this to the original hardware version, but this isn't something that you want to do anyway because the hardware version will always win! However, this is overall an awesome sounding phaser plug-in, with a lot more versatility than other phasers out there. I love the unique controls that you have, making it easy to get all sorts of interesting and traditional phasing tones. The Eventide Instant Phaser plug-in would be one of the first phaser plug-ins that I would recommend for someone who wants a nice sounding phaser plug.
Did you find this review helpful?yesno
»