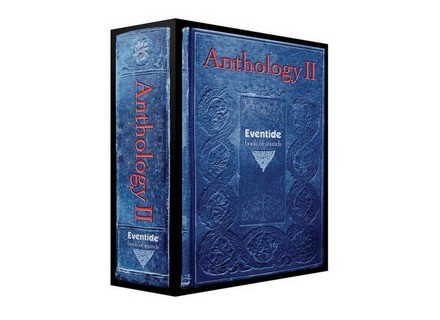 Anthology II, Other effects bundle or multi-effect from Eventide.

Eventide Anthology II
5
Eventide's Anthology II bundle is a collection of plug-ins that are compatible with nearly all DAW's. The bundle has a nice amount of plug-ins included, many of which are also available on an individual basis. Included in the bundle are the Clockwork Legacy plug-ins (five in total), Eventide Reverb, EQ45 and EQ65 equalizers, Precision Time Align, E-Channel, Ultra Channel, H3000 Band Delays, Quadravox, Octavox, H3000 Factory, and the Eventide Reverb. As you can tell, there are a lot of plug-ins included here and I was definitely surprised as well to see how much was included. I don't own the bundle at home so at no point was I involved with installing it. Most of the plug-ins are modeled after analog gear, which is cool because it gives you that kind of feel, but in general the plug-ins do have a good amount of control settings to get used to. Some are easier than others of course, but of few of them get quite in depth like the H3000 plugs. The manual is probably a good thing to have around, although you can always go on Eventide's website for support.

The studio I work at has the full Eventide Anthology II bundle running on just about all of our systems. All of our rooms have Pro Tools HD systems and can handle a good amount of processing, so very rarely will we have any problems at all when it comes to running plug-ins. That's the case with all of these plug-ins in the Anthology II bundle, although some take up more processing power than others. Definitely make sure you're currently able to run plug-ins comfortably before buying this...

The Eventide Anthology II is overall one of my favorite plug-in bundles for a few reasons. The first of course has to be the vast amount of effects and processors they give you here. The versatility is outstanding as there's something for every situation included in the bundle. It's definitely also a good amount of bang for your buck here as you're getting a ton of great sounding plug-ins in one place for quite a reasonable price. These plug-ins aren't your run of the mill plugs as they're definitely professional, so while it's not the cheapest bundle on the market, it's still very reasonable considering you're getting the full line of Eventide plugs. This is a must look at for anyone who is looking for professional grade plug-ins!
Did you find this review helpful?yesno
»

Published on 02/02/09
Eventide is offering a special discount program for Anthology owners.

Other Eventide other effects bundles or multi-effects