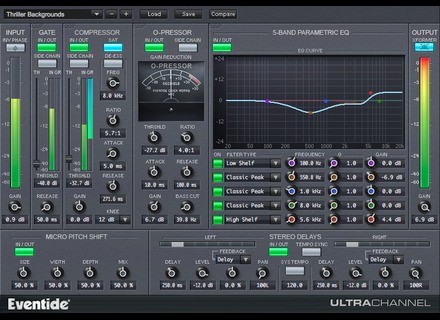 Review of the Eventide UltraChannel UltraChannel is more than just your average channel strip. It also features Eventide's signature delay and modulation effects, and is almost like an entire effects collection in a single plug-in. Read on to find out more. Read more…

View all offers for Eventide Ultra-Channel »

Eventide Ultra-Channel
5
Installation of UltraChannel is straight-forward, however, you will need to have an iLok account and install their License Manager software to register your copy. It’s not the most intuitive process but once you’ve got it registered, you’re ready to start loading it in your DAW.

The user interface is extremely simple with no menu diving or pages. Every function has a labeled knob, button, or slider dedicated to it and each of these functions are clearly and concisely explained in the manual.

I’ve been using UltraChannel in both Renoise and REAPER without any instability, however, it is somewhat performance heavy. On my PC with an Intel i5 2500k overclocked to 4.5ghz, each instance of UltraChannel used around 1.7% CPU. Making a similar Channel Strip FX chain with REAPER’s plug-ins only used 0.8% CPU per instance. This is far from being a dealbreaker, but it is something to keep in mind if you if you plan on using UltraChannel frequently in very large sessions or if you have an older/less powerful computer.

UltraChannel consists of 2 compressors, an EQ, a gater, a micro pitch shifter, and a Stereo Delay module. The compressors, EQ, and gate can be rearranged in any order, but the micro pitch shift and Stereo Delay are fixed and always placed after the other 4 modules and before the output. The compressor has your standard threshold, attack, ratio, and release controls but also contains a useful de-esser to help remove sibilance as well as a saturation button to add a bit more grit. The O-pressor is a pared down version of Eventide’s Omnipressor, which is designed to add more flavor to your tracks than a standard transparent compressor. The 5-band Parametric Equalizer allows a lot of flexibility with the ability to choose the kind of filter for each individual band. The Gate is probably the most straight-forward module in the plugin, with no additional features, just a threshold slider and release knob. The Micro Pitch Shift slightly changes the pitch of the track and increases the panning spread, effectively acting as a stereo expander. The stereo delay is a transparent delay but with the added function of being able to route the feedback of the delay into some of the other modules in the plugin giving the tail some character. Using this feature in conjunction with rerouting the top level modules can give you very interesting delay sounds.

Ultimately, UltraChannel is a great sounding, versatile channel strip plugin with a lot of flexibility due to the module rerouting. The O-pressor is capable of altering your tracks in a very extreme way with its extremely long attack and release times. I also find myself going to the Micro Pitch Shift a lot as it can really thicken up pads or bring lead sounds a bit forward in the mix. The retail price for UltraChannel is fairly expensive, but it’s quite capable of being a go-to channel strip.

Eventide Ultra-Channel
5
Eventide's Ultra-Channel plug-in is one of a number of plug-ins found in the Anthology II bundle. I'm not sure if it's also available on an individual basis, but I'm fairly certain that it's not. The plug-in is really a number of different processors in one, including a gate, compressor, Omnipressor, pitch shifting, stereo delays, and a five band parametric EQ. That's a lot to have all in one place and it's definitely nice to have the option of it. It would take a pretty long time to go in depth with all the different controls available here, but the aforementioned processors should be enough to show you how much is going on here. I don't have the Anthology II bundle running on my home system so I don't know what the installation process is like nor do I know how helpful the manual is or isn't.

There's definitely a lot going on inside the Eventide Ultra-Channel plug-in, so I would think that it takes up at least a decent amount of processing power for a plug-in. It's hard for me to judge because I've only used it in Pro Tools HD environments, as that's what kind of systems we've got at the studio where I work and where I've been using the plug-in. It's always going to be on a case by case basis here, but make sure you have at least a decent system before attempting to run the plug-in.

Overall, I think the Eventide Ultra-Channel plug-in is a really great one. While there are a good amount of multi-processor plug-ins floating about out there, rarely will you find one with this amount of detail and control. You're getting the best of a few different worlds here, as it's awesome that it actually includes in the Omnipressor processor in here as well, which is another plug-in available in the Anthology bundle. Everything in here in terms of processors definitely sounds pretty professional and I can't say enough about having it all in one place. I don't believe that this is available as an individual plug-in, so check out the Anthology bundle if you're at all interested in it.
Did you find this review helpful?yesno
»

Published on 01/05/16
Until January 31st, Eventide offers its Ultra-Channel virtual channel strip with an 80% ultra-discount.

See all 13 photos of Eventide Ultra-Channel »

View all 6 videos of Eventide Ultra-Channel »

Listen to the 5 audio files about Eventide Ultra-Channel »