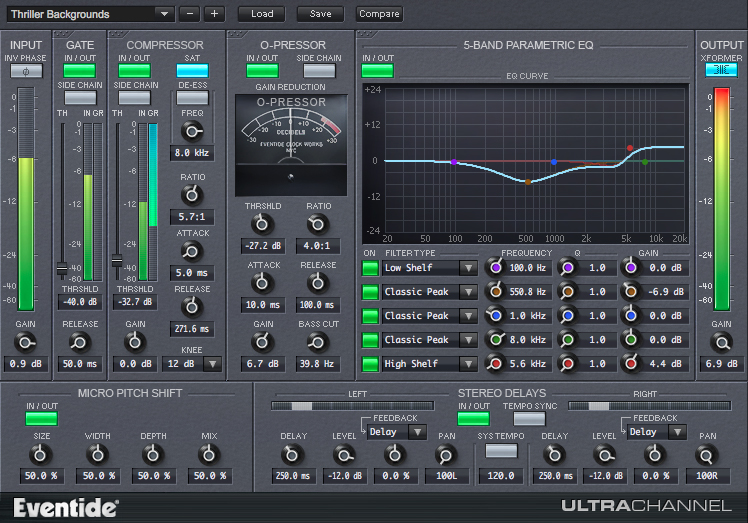 UltraChannel is more than just your average channel strip. It also features Eventide's signature delay and modulation effects, and is almost like an entire effects collection in a single plug-in. Read on to find out more.

UltraChannel features eight modules configured in two rows stacked vertically. In addition to Input and Output modules, UltraChannel features a 5-band parametric EQ; a compressor with switchable saturation; O-Pressor, another compressor (taken from Eventide’s Omnipressor; a Gate; MicroPitch, which lets you dial in small pitch changes, and Stereo Delays, which is a full fledged delay section offering up to 600ms of delay per side.

Other than the Input and Output, all the modules on the top row can be dragged and dropped to change the signal order. The Micro Pitch Shift, and Stereo Delays sections are fixed in the signal chain, coming after the movable modules.

The user-interface is filled with knobs, and all are pretty small. There’s not a lot of wasted space, so in order to offer so many parameters, small knobs were probably inevitable. Still, I wish they were a little bigger.

UltraChannel is iLock protected, and installation and registration are easy. No jumping through hoops like with some plug-ins. Of course, you’ll need to get an iLok if you don’t own one.

Now, let’s focus in on the modules.

The input module features a Gain control and an Invert Phase button. The Gate offers only Threshold and Release controls. It has dual meters for Input and Gain Reduction and a Side Chain input, as well, allowing you to trigger the gate with another audio source.

Despite the lack of parameters, I found it pretty effective. It was easy to gate out part of the signal on say, a drum kit. In one of the audio examples below, you’ll hear the Gate used to simplify a percussion loop.

Ultra Channel’s five-band EQ features a Low Band that offers a choice of 6dB- and 12dB-per-octave Low Cut filters, a Low Shelf filter, and two different peak filters, Modern and Classic. Modern’s Q can be set narrower than Classic, allowing for more precise cutting or boosting. Modern and Classic are available on all the other bands, and the High Filter band (5 to 20kHz) offers 6dB- and 12dB-per-octave High Cut filters and a High Shelf filter.

You get the usual Frequency, Q, and Gain controls for each band, and a graphic display above where you can drag control points to adjust the filters. There’s not a ton to say about this EQ, other than it’s effective and easy to set. I wish it had a real-time analyzer, but those are infrequent in channel strip EQs.

The Compressor is one of two dynamics processors in UltraChannel, the O-Pressor being the other. The former is more of a transparent compressor whereas the latter (which I’ll talk about in a moment), is more of a character compressor. That said, you can add soft saturation through the Compressor by activating the Saturation button.  What’s more, if you put the O-Pressor in the signal chain before the Compressor and turn its output up high, you can drive the Saturation into cool-sounding distortion.

The Saturation is designed to affect the low frequencies more. For example, on a drum loop, it will make the kick distort, affect the snare less, and the cymbals even less. The Saturation effect works best in conjunction with the Transformer effect (labeled “Xformer) in the output module, which simulates analog transformer-core saturation. With both on together, you can get some musical distortion to use on a variety of sources. At high settings it’s not super smooth, sounding more like a bit-crusher, but it’s great to have, and you can use it more subtly to add life to dull sounding tracks.

The O-Pressor is based on the compression section of Eventide’s Omnipressor, a hardware dynamics processor. Like the Compressor module, it offers Threshold, Ratio, Attack, Release, makeup Gain, and a sidechain input. It also gives you a Bass Cut knob that works like a high-pass filter in the detection circuit, keeping bass frequencies from overly exciting the compressor, which they’re otherwise prone to do.

The O-Pressor has a retro looking gain-reduction meter, and when you get its needle moving into negative territory, you’ll hear the coloring to the sound. I liked it a lot on drums, guitars, bass — any kind of source, really.

This module sets UltraChannel apart from its competitors, and is based on the effect of the same name in the Eventide H8000 hardware processor. It features four parameter knobs: Size, which controls the amount of pitch shift; Width, for controlling how wide the stereo effect will be, or whether it will be mono; Depth for controlling the amount of delay in the signal, giving it a more spread out sound at higher settings; and Mix, which is a Wet/Dry control.

I found it to be a very useful effect. You can add subtle or not-so-subtle width to the sound, and it can be used, in conjunction with the Stereo Delays section, to get produce phase-shifter-style effects.

How useful is it to have a delay section built right into the channel strip? Very. Rather than having to open up a separate delay plug-in, you can add up to 600ms of delay on each side, and even tempo sync it. I discovered that activating the Tempo Sync switch doesn’t give you tempo-specific settings if you try to dial them in with the delay knob. Instead, you have to use the delay sliders, which are right above the knobs.

Both sides of the delay have their own controls including Delay (time), Level, Feedback, and Pan. It’s easy to setup a variety of stereo delay effects. Having pan controls for each channel is really handy.

Each side of the delay also has a pulldown that allows you to patch in one of the other effects onto the delay repeats. For instance, if you have the gate on, selecting Gate from the menu will put the gate on the repeats. It’s subtle, but gives you additional control.

The Stereo Delay module is not as fully featured as some dedicated delay plug-ins, but it gives you plenty to work with for most types of delay effects.

The Output section is, of course, the final one in UltraChannel’s signal flow, and it offers both a gain control and a switch to kick in the aforementioned Transformer effect. Unlike some channel strips, there’s no limiter you can switch in on the output so you have to be careful how you set your levels. Turning on and off various features within UltraChannel can impact the levels pretty heavily, so if you want an output that’s not overloading and has some headroom, you have to pay attention to the level setting.  With the levels correctly set, Ultra-Channel sounds great.

Plug-in presets are not always that useful, but they definitely are with UltraChannel, which gives you a large selection broken up by instrument type. Even cooler, you get presets designed by the likes of Richard Devine, Sasha, Chris Carter and several others. I find it helpful to see how others are using a plug-in, so these “celebrity” presets are useful.

Enough talking about UltraChannel, here are some audio examples of it in action:

Here’s an example of the plug-in used to liven up a percussion loop. The first two bars have UltraChannel bypassed, and then the next four it’s on, with the Gate simplifying the loop and the delay giving it some extra pizazz.

In this example, a male vocal line is compressed and made a little bigger with a small amount of Micro Pitch Shift. The first time through is dry and the second time with UltraChannel.

In this example, an acoustic guitar gets sweetened with Micro Pitch Shift, Delay, and the Transformer effect. First dry and then with UltraChannel.

This example features distortion from Saturation and Transformer effects on drums. The first two measures are without UltraChannel and the second two with.

Here’s a drum loop that’s turned completely on its head. using one of Richard Devine’s presets, called Botich. First you hear it dry then with the effect.

UltraChannel ($249) is not cheap, but it gives you a huge amount of functionality in a single plug-in, and offers a lot of creative possibilities. It provides stellar sound, great effects, and precision control, which is no surprise coming from Eventide. If you’re looking for a channel strip with more than just the usual processors and controls, UltraChannel is a great choice.