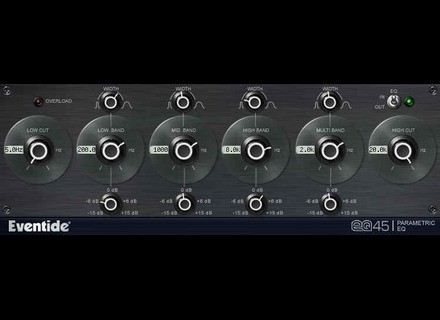 Eventide EQ45
5
The Eventide EQ45 is a software plug-in equalizer that comes as part of Eventide's Anthology II plug-in bundle. I don't know if it's also available as an individual plug-in, as the bundle is what we have at the studio where I work. I guess that this is modeled after a hardware EQ45 that I presume was put out by Eventide, but I've never used the original. I also wasn't involved at all with installing the bundle as the studio has had it since before I worked there. As far as the make up of the plug-in is concerned, it's fairly simple to use. It's essentially a four band EQ, but also has high and low pass filters. Each of the main four bands have parameters for frequency, gain, and width, while the outer two just allow you to set the frequency where you'd like to begin the cutoff. There really aren't any other parameters you need to be aware of, so I don't believe a manual is necessary.

We're running the Eventide EQ45 plug-in and the whole Anthology II bundle on all of the systems that we have at the studio where I'm working. We have a bunch of rooms here, so I've used it on a few different systems, but they're all Pro Tools HD based anyway. I've really never had a problem running any plug-ins on any of our systems, and haven't had a problem with this one for sure. I don't know how it would run on a less powerful systems however...

The Eventide EQ45 is definitely a nice little EQ plug-in to have available in your DAW. There are a ton of plug-ins that come in the Anthology II plug-in and while this one is probably the least flashy, it's still quite useful. It sounds good and it isn't hard to get the full potential out of it, even if you're not the most experienced when it comes to equalization. I like the old school look of the plug-in, but it doesn't necessarily have a 'vintage' sound to match. Again, since I haven't used the original EQ45 I can't say how this compares to it, but it's a good EQ in it's own right for sure. I'd check out the full bundle if you like this one...
Did you find this review helpful?yesno
»