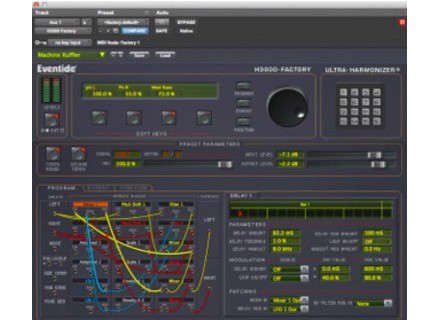 H3000 Factory, Other effects bundle or multi-effect from Eventide.

Eventide H3000 Factory
5
The H3000 Factory is a DAW plug-in that re-creates several key algorithms from the H3000 Harmonizer® effects processor (rackmount unit). There are over 450 presets, along with 100 artist presets (and over 100 original presets from the H3000). Amazingly, you can combine upward of 18 effects blocks in any number of configurations with elements such as sweepable delays, 19 wave shapes, filters, pitch shifters, mixers, modulators, oscillators, envelope generators, etc. Some effects can be locked into a tempo and each preset can be adjusted in real time or synchronized to a session. There’s also a Snap Shots section that allows you to create variations on a preset and then select those sub-presets at a click of a mouse.

Although there are many presets and effects made for drums, voice, bass, synth, etc. (and some do not even require an input as they are sound generators), I focused on the electric guitar. My first interest was with pitch shifting, and although many can sound dissonant when high in a mix, they produce some noticeable fatness and depth when low (25%) in the mix, which is what I did in the demo’s samples. I also included some of my favorite delay presets, as well as some presets that are not strictly delay, pitch shifting, etc. Hours of discovery and fun, the H3000 Factor plug-in offers a wealth of awesome and unique sounds.

Eventide H3000 Factory
4
Eventide H3000 is a harmonizer plug-in that can confuse you if you are not use to working with algorithms to create modulation and filtering. It will take some time to understand how to work this program even if you look at the manual because most of understanding it is just application and spending time messing with it. There are over 100 original effects from the original H3000 (hardware) and over 100 newly added presets from some really good sound designers on Eventides team.

Installing it was pretty quick because it is not a large program it just takes time to understand. It will run on just about any Mac as long as you have sufficient CPU available for it. The main reason I chose to go with this plug-in is for it’s high and low pass capabilities and even for the pitch shifters, filters, and delays. Working with all of these aspects too me some time to understand in the H3000 plug-in because everything seems to be analog and you need to program these functions yourself.

I am not sure if they have a DEMO version of this plug-in but if they do I suggest trying it out before you buy it. It is not like your standard harmonizer plug-in with a bunch of presets. It requires some more work.
I use this with Pro Tools HD and it works just fine on the Mac we are using running operating system 10.5.1. This plug-in is price well but it could be a waste of money if you don’t learn how to use it properly so be prepared for a learning curve. There is a Native Version of this so it can work in multiple platforms but I have only worked with it in Pro Tools HD and also Pro Tools LE.

Eventide H3000 Factory
5
The Eventide H3000 Factory plug-in is one found in the Eventide Anthology II bundle. I'm not sure if it's available individually or not, however. I don't own this plug-in myself, but use it at the studio where I work - we've got the Anthology II bundle running on all of our systems. I wasn't involving with installing the plug-in, but you'll do so when you install the Anthology II bundle as a whole. Learning to use the plug-in will take a little bit of time for sure, mostly because there's just so much that you can do with it. I haven't fully delved into all the features and effects available here as I've admittedly only scratched the surface. Still, it's easy enough to get the basic sounds from the plug-in. Featured as effects here included delays, pitch shifting, filters, and other synth like parameters like envelope and LFO control. The manual might be a good idea for new users but isn't totally necessary.

The studio I work at has the Eventide H3000 Factory plug-in running on all of our Pro Tools HD systems here. We're a whole block of studios, featuring a number of different rooms, so I've actually used this on a few of the different systems. Being that all of them are Pro Tools HD and are all running on great Apple computers, I've never had a problem at all running this plug-in or any other plug-in for that matter. Having said this, it's hard to predict how it might run on an LE system or something comparable...

The Eventide H3000 Factory is another reason that DAW users should check out the Anthology II bundle. I'm not sure if you can buy it individually, but if you can it's also worth looking at in this capacity. This plug-in version is modeled after the vintage H3000 which is a somewhat legendary processor at this point, as are many of the older Eventide hardware processors. I really like how versatile the plug-in version is as you can get all sorts of different sounds from it between all the different processors. I like it best for it's delay and pitch shifting capabilities as you can really get some funky sounds with it. The H3000 Factory is highly worth checking out for anyone who is a fan of the old Eventide stuff like the H3000, but also for anyone looking for some unique effects to use in the box.
Did you find this review helpful?yesno
»

Published on 04/07/15
Eventide reworked its H3000 Factory plug-in and launches a new AAX, VST and AU version which is on sale through April 30th.

Other Eventide other effects bundles or multi-effects