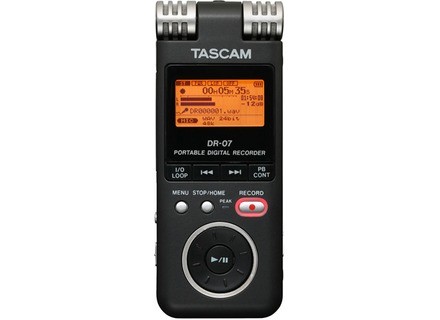 Tascam DR-07
3
Playing in small ensembles, the DR07 looked like a useful practice and self-assessment device. This proved to be true ... and it doesn't cost much. Also, 'small ensemble' doesn't mean really 'loud blues-rock trio', so our stuff is not too challenging to record.

These were on sale for $130 at Daddy's Junky so I bought two, one for my music and one for a friend.

It's cheap, small, reasonably convenient and does a decent job. I especially like that the screen is visible in dark clubs, etc cuz that was not the case with my MiniDisc recorder.

Also, basic recording does NOT require navigating 2 or 3 levels of menues via pushbuttons [another gripe with the minidisc].

It runs on a pair of AA batteries, which I very much prefer to any form of built-in rechargeables. Battery life is good enuf for my purposes.

The 'Data Wheel' is bogus. I had to exchange one DR07 for sketchy functioning of the wheel. I could tell by the faulty functioning that it's not a real data wheel but simply a plastic wheel with bumps on it that tap at a pair of microswiches. Even when functioning as designed, such a design is slower to use and subject to more wear and tear than a real printed circuit multi-contact data wheel.

Possibly due to the nature of the data wheel, fast playback searching *within* any track is not-so-fast. You can also 'fast search' inside a track via the FF and REW buttons, but the max speed avaiable is 10X of the regular playback. This means it takes a full minute of FF or RW to run past 10 minutes of music. That's always such a looooonnnng minute ! ! !

I get the impression that the recording circuits, and mics, are of a better quality than the playback circuits. When I burn the files to a CD, the sound is excellent when the CD is played. But if I play back the direct output of the DR07 to the same amp and speakers that plays my CD player, the sound is audibly inferior to what I get when playing the CD. 'Inferior' means a lack of bottom, and a generally thinner, 'canned'-sounding playback.

I have never tried playing the SD card [with the dr07's wav files on it] in the card slot of another [more deluxe] recorder. That would clarify my opinion here. OTOH, the files sound better when copied to my PC, which is an ordinary office PC that does NOT have any multimedia asspirations ... meaning it has no fancy sound card.

So again, the DR07 itself seems to be the worst device for listening to playback of its own recordings.

Compared to other small digital recorders I would say that 3 points of the DR07 where competitors [or better tascams] might be offering superior design are:

1. the data wheel, as mentioned above.

3. 1/4' jacks and/or XLR jacks instead of the 1/8 jacks on the DR07. In fairness, bigger jacks would make the unit much larger.

My main gripes are the slow 'fast search' and the questionable data wheel design.

The inferior playback is less important, cuz there are other ways to play back the recordings outside the unit. And these other ways also have better fast search.

However, it's small, affordable, convenient for the task of basic recording.

I'm rating it a '3', but that's as a $130 recorder competing in what we might call the $400-and-under catagory. For a $130 it's an excellent bargain and serves my simple needs. With an outboard mic, I'm sure it could make fine recordings for those with more advanced needs. But those with more advanced needs would prolly be happier with a $300 or $400 unit, and not regret the extra expense.

Tascam DR-07
4
This unit is orangish-red and looks great. I've been playing guitar and keys for years and I'm always looking for something to nail down ideas with, hence the purchase.

I bought this for $169 from Musician's Friend. As noted above, I needed something small and portable to sort of keep with me for the purposes of recording ideas when they come to me - you know how that goes. You never have anything nearby when creativity strikes..

Super convenient. The unit records 24-bit wav or mp3 files to SD cards or SDHC media, there's a pair of stereo electret condenser mics with auto gain on the inputs. The sound is really high quality.

The 2GB included SD card is not big enough. It's a nice thought so you can start playing with the unit, but as soon as I opened it, I ran out to Best Buy and got a 16GB card. Why mess around, right?

Tascam builds good gear. I used to have an old four track from them and got years of use. This things seems to be constructed the same way - solid - as in it might be able to take a few drops here and there. Let's not try to test that out though.

Great unit, great price. Can't complain. It sounds great, it looks great, it works great, and aside from the cheap 2GB SD card that comes with it, it's a hell of a unit. What do I rate it? 4 - nothings perfect. hahaha.

Tascam DR-07
5
This pocket recorder allows for versatile use. The reproduction quality is powerful, connections are adapted to different uses, powered two 1.5v batteries, it is advisable to connect a transformer in static use.
Only downside, the built-in mics are very sensitive to manipulation, it is recommended to use an external stereo microphone to solve this problem.
Adjustable sensitivity is calibrated, the display is clear and precise handling menus is facilitated by the central wheel, ergonomics suited.
I use it mainly as a machine jungle on a flexible support over the console, great art at hand.
To summarize, a good material.

martinc's review (This content has been automatically translated from French)

Tascam DR-07
5
I've had nine months, I used to save the two groups weighed again to record two shows and also as a mp3 player lounge.
I recommend buying the power supply 5V Tascam. NiMH batteries but it works to be quiet they must be recharged before each repeat, which is tedious. Attention, a power supply voltage multi pedal, which gives 4.5V or 6V it will not work.
I made a recording with the power supply over the battery, I unplugged the power supply during recording, the batteries have taken over without disrupting the recording.
I made a record with the batteries by pushing them to end, recording will stop but it has been recorded so far is not lost.
I made a recording to saturate the memory card, all that was recorded before saturation is kept.
The sound with microphones embedded is not bad, just a medium, the stereo is not very wide, but it's still very good. Microphones embedded in the fall a little serious, but the new firmware (1.02) includes a filter booster serious, I just try it and it works. I tried to register with the entry line, the ass of the mixer, and the sound is excellent. Operation is simple.
The USB connection works well with Windows XP. Warning do not buy any memory card, I have a 8 giga works very badly. I have no problems with several Giga 4, so I recommend buying a card that listed Tascam if you want more than 4 Giga. It comes with a 2G, which is already 3:20 in Stereo wav 44.1 kHz 16 bits. But you can record to mp3. Curiously missing throughput 160 Mb / s recording, but it reads well. USB2 transfer of 647 MB ​​(47 files) from the DR07 to a NetPC takes 45 seconds, 14.4 MB / s with an SD Card Sandisk Ultra II 4 GB sold for 15 MB / s.
For the curious user manual can be downloaded from the Tascam site.
The machine is absolutely silent, even the power supply does not snore. The wheel can be used to move in a registration already made, it is, when there was a repeat of three hours, and we have no way to get a time code, it is desirable to have a system performing fast forward and rewind. That said there are ways to further improve the operation of the dial. And even once during the use of the wheel the machine crashed, had to cut the power supply and remove the battery to unlock, but it happens very rarely. Another small detail, reading, when you get near the end of a song, if you want to select another with the knob, the action selection is canceled if the song reaches the end before we have finished selecting.
Startup takes 9 seconds and no noise to power the speakers. The decision takes 4 seconds and you can hear a slight cloc in speakers but nothing bothersome.
Tip: in toto you can buy an adapter 3 / 8 - 1 / 4 ref 118999 for 4 euros you can screw the DR07 on a microphone stand.
It's true that it lacks a cover, having said that when you add the DR07, the batteries, manual, USB cable, audio cable, adapters few mini jack / jack / RCA ... the power supply industry, an SD card rabe, but rather a bag that must be!
To save repetition is really good, I would do without this choice problem. We feel the seriousness, the quality, expertise Tascam.

Did you find this review helpful?yesno
»
Read the 6 user reviews on the Tascam DR-07 »