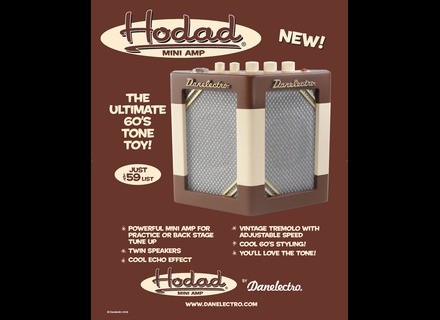 Danelectro Hodad Mini Amp
4
I picked this guitar up about three years ago at a local pawn shop, but it was brand new...still had the tags on it and everything. It cost $180.

It's got a good set of features but is mostly a "fun" guitar. It has a tremolo bar that's styled after the Bigsby, has two pairs of lipstick pickups that also have coil tap and out-of-phase settings, and has a nice paint job described as pearl red. All in all, a nice looking guitar.

It's like other Dano's, where you get lots of masonite and plastic. Still, the neck is straight and fast, and it can make a variety of cool sounds. If you dig surf music, this will meet a lot of your needs: think Mosrite.

The pickups are pretty noisy, as you might expect. They look kind of like humbuckers but aren't wired that way, so you get single-coil noise.

Pretty good for what it is. As long as you know what you're getting, you should be happy with it. It's been fine since I've had it; no problems at all, and solid as a kitchen counter (which is what it's mostly made of).

Dano has made some really fun guitars, and this may be the best of the lot in looks, sound, and overall quality. For the price, it was a great deal, and I still pick it up and plug it in pretty often despite having choices of other, more well-known guitars.

Danelectro Hodad Mini Amp
5
I had bought this guitar about 6 months ago at a local music store. When I had first saw the guitar, I knew it had to be mine. The price tag on this Dano was $200.00. But, I traded in my Washburn X-Series Guitar for it.

This guitar is awesome. It gives me eveything I need. It has such a Twangy sound to it. The double coil lipstick pickups look great, also as they do perform great. It could be either a lead guitar or a rythym guitar. It has a rosewood fingerboard, Gotoh tuners, Adjustable bridge with a great whammy bar. The Out of Phase and coil Tap affects sound great soloing. The glossy black paint job, with the silver metal flake really put the icing on the cake.

This guitar is very fragile, very light. (Because its a hollow body) Dont abuse it!

This guitar was made with very good construction. It's my only dano thats a show off.

Don't pass up the chance if you see this guitar for sale. You will regret it if you dont get it.

Danelectro Hodad Mini Amp
5
Bought used but in nearly new condition on ebay for $190 including shipping.

When I opened the box, I was stunned at the aesthetics of this guitar. The pictures didn't do it justice. Mine is very pretty with a slightly sparkling white finish and a dark band around the body, with a light maple neck and rosewood fretboard. Beyond the looks, the guitar is very light and comfortable to play--its sort of reverse strat body shape makes it easy to play sitting down or standing. Plus, the electronics and hardware on this Dano are top-notch. The lipstick pickups sound great, the tuners (Gotohs) keep it in tune very well; adjustable bridge. There's some interesting options with the tone--the knobs "pop up" and function as coil taps, I think. I haven't figured it all out quite yet, since I'm something of a beginner, but it's fun playing around with the sounds it creates. In short, a lot of guitar for the money!

The one reservation I have about the guitar is its sturdiness. I wouldn't feel comfortable banging this guitar around, mainly because it has a bolt-on/screwed in neck and the body is made of some sort of reinforced composite (it's actually hollow) and I fear it might be somewhat brittle (so don't drop a dano, I guess!).

It seems very well put together. No problems with any of the (very nice) electronics or hardware. The finish is perfect, the neck thin and strong. Despite the bolt-on neck, mine stays in tune very well. Again, the only reservation I have is its possible fragility.

I love my guitar--it looks sweet, plays great, sounds awesome and uniquely Danelectro. The tones I get from this guitar are really neat. The bonus is that even when it's not plugged in it's pretty resonant for an electric. I'd recommend it over a similarly priced strat (aka Squier or similar).

The pickups were amazing!!! They had a nice vintage sound to it plus they were double coiled so they had lots of power. It looks amazing too! I loved the rosewood fingerboard. I also liked how it had a volume and tone for each pickup. It was loaded with extras like a adjustable bridge and gotoh tuners.

Perfect quality. Hasn't had a problem yet! Also the sound quality is very good.

This review was originally published on http://www.musicgearreview.com
Did you find this review helpful?yesno
»
Read the 5 user reviews on the Danelectro Hodad Mini Amp »