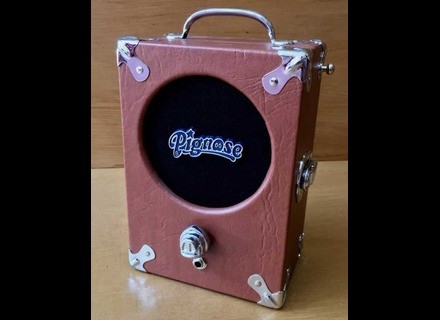 Pignose Legendary 7-100
3
This is a small, portable digital amp with 5 watts. It's basically only good for practice. There is one guitar input and a mic input in the rear of the amp. There is some amp modeling, 2 clean amps, 3 blues, 2 crunch; settings, 3 Hi Gain amp models and one labeled drive;. There is a gain knob, a tone knob, and a master volume. There are also effects, which include reverb, delay, chorus, tremolo, flanger, phaser, compression, auto-wah, and some combinations. There's two buttons and a knob for adjusting the effects.

The general setup is easy. It gets a little more difficult when you start working with effects. The manual explains how to use them but even then it is time consuming and sometimes annoying to really adjust the effects to your specifications. The most annoying thing about it is that there are two knobs that adjust everything, so you either have to remember what each knob does for each effect or refer back to your manual every time. This gets old quickly. The manual is pretty clear about explaining everything, but it shouldn't be necessary to refer to it all the time.

The amp is pretty good at simulating a diverse array of sounds. Don't expect pristine tone though. This amp really doesn't have too much too offer in terms of quality. You can get a rough idea of certain sounds from playing with Different amp settings, and the effects can be cool in limited amounts. Overall though, you'd never do anything beyond practice with this if you knew better. Recording and gigging are not an option with this. If you need to work on solos in your dorm room, this might be a great idea though. Considering this, I was a little more lenient with my grading.

I've been using it for two years. I didn't have much use for it after I moved out of my freshman dorm, once I had more room to practice and was able to use a bigger, better amp. I don't like the effects, as they tend to sound pretty terrible most of the time and are somewhat hard to use. I tried some other models, some by Marshall and Fender (the model numbers escape me now). Those definitely sounded better but did not have the same effects. This is the issue that is the deal-breaker. I think the price is pretty reasonable for this amp, considering I didn't pay too much for it, but you have to make sure you're actually going to get enough use out of it. Also, be aware that it breaks easily; my roommate didn't admit it, but he broke it accidentally somehow. I had to replace it and i realized later that it probably wasn't even worth. I'd say that unless you really don't have the little bit more cash necessary to buy a better practice amp, stay away.

Pignose Legendary 7-100
5
There are a tone of thing that are nostalgic about rock n roll. Some times it the clothes the light or even the sounds. The sounds you hear from old vinyl recordings from the 60's and 70's. One of those sound is the Pignose 7 100. This amp has been on countless recordings from the 70's all the way up until today.

This little box is not only unique in tone but also in the way it looks. It looks like a mix between a suitcase and a lunch box. Then it has this funny volume knob that is in the shape of a pig nose. That is all this thing has to it beside opening up the box to have this airy sound. The box is actually a fuzz unit more like a distortion pedal than anything. It just so happens to have a speaker attached to it. Interesting to say the least.

Like I said before this is a fuzz pedal with a speaker attached to the unit. Don't be fooled into thinking this is only for distortion. If you simply roll back your guitar's volume and roll down the volume of the amp and switch over to the neck pickup and get a sweet clean tone.

I like this amp with any guitar. This amp is such a classic amp for rock n roll that it makes it a must own. Play this amp with whatever you like It sounds good in the recording studio as well.

This is a legendary amp for sure. These units come in new at around $80 which is a great price. The tone from this thing is remarkable and nothing on the market is anything like it.

I recommend every single guitar player in the world to own one of these amps. They are fun and can add a whole lot of tone to some of your recordings. It is hard to replicate or even recreate this tone in any other application.
Did you find this review helpful?yesno
»

Pignose Legendary 7-100
4
Having just reviewed a really bad portable amp, I feel compelled to give kudos to a product that figured it out. The Pignose 7-100 is a portable guitar amp. It is powered by 6 AA batteries, or the optional AC adaptor. There is one 1/4" input and a pre-amp out jack, which can be useful in some recording and stage sessions (by running the pre-amp out signal to the PA, or to a DAW via the console. There is a knob for volume only, but trust me, the tone is solid. The amp has 5 watts of power.

This is simply used for practicing for the vast majority of its users. In this case, the amp is one of the easiest ones to use that I've seen. The manual is pretty uncessary overall. You can attach a guitar strap to it to carry it around your neck, which is really sweet if you are carrying your guitar in your hand and want a free hand. The pre-amp out jack is cool, I don't use it much but I know that some people have gotten great studio sounds with it. I think that's

Don't look at the 5-star score and assume this thing sounds amazing. It doesn't. It's just that for a portable five watt amp, you can really not do better. I'm convinced to this day that there isn't a better sounding amp that you can wear around your neck. The volume knob will adjust gain to a necessary degree. I like all the sounds equally. This is a practice amp that will actually make you sound good when you practice, which is a surprising rarity once you reach a certain level of playing. There really is no control of the EQ, so asking about the frequency curve is somewhat difficult to answer. I would say that they are pretty neutral in that they don't ever favor one end of the spectrum over the other.

I don't really have much to say other than this is a pretty cool device. I'd say that overall, this is worth it for whoever would benefit from having a quiet amplifier that's easy to carry around. The sound is better than anything you'll find in amps this size, and even a few sizes bigger to be honest. Highly recommended.

bimsbros's review (This content has been automatically translated from French)" Extra!"

Pignose Legendary 7-100
5
Transistor stack with the possibility to use a transformer, short is simple, effective, that is fine and good ...

Easier does not exist, this is a must to have ..
The more you turn your nose, the more it spits .. It is convenient to carry, batteries not last quite some time, outside in it is very correct in output level.
And he has the mouth ..

Question tone the question is not what I'm looking but mostly what I find .. (philosophe.. Hmm .. a bit I admit ..)
I use it with all my guitars (musicman, fender, gibson, ibanez) but especially my strat ..

I have 2 years, it's not the amp everyday, it's just pure madness, I am not using its full potential due to lack of time, need and because my level required not .. But when I use it becomes a moment of particularly nice guitar ..

Did you find this review helpful?yesno
»
Read the 24 user reviews on the Pignose Legendary 7-100 »