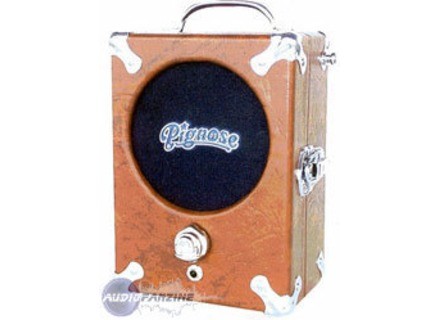 Pignose Legendary Tweed
5
There are a tone of thing that are nostalgic about rock n roll. Some times it the clothes the light or even the sounds. The sounds you hear from old vinyl recordings from the 60's and 70's. One of those sound is the Pignose 7 100. This amp has been on countless recordings from the 70's all the way up until today.

This little box is not only unique in tone but also in the way it looks. It looks like a mix between a suitcase and a lunch box. Then it has this funny volume knob that is in the shape of a pig nose. That is all this thing has to it beside opening up the box to have this airy sound. The box is actually a fuzz unit more like a distortion pedal than anything. It just so happens to have a speaker attached to it. Interesting to say the least.

Like I said before this is a fuzz pedal with a speaker attached to the unit. Don't be fooled into thinking this is only for distortion. If you simply roll back your guitar's volume and roll down the volume of the amp and switch over to the neck pickup and get a sweet clean tone.

I like this amp with any guitar. This amp is such a classic amp for rock n roll that it makes it a must own. Play this amp with whatever you like It sounds good in the recording studio as well.

This is a legendary amp for sure. These units come in new at around $110 which is a great price. The tone from this thing is remarkable and nothing on the market is anything like it. However, this amp sounds exactly like the regular Pignose and you'll be only paying for the tweed version. So if you don't care about the tweed thing then I would recommend the regular which is $30 cheaper.

I recommend every single guitar player in the world to own one of these amps. They are fun and can add a whole lot of tone to some of your recordings. It is hard to replicate or even recreate this tone in any other application.
Did you find this review helpful?yesno
»

Using the Pignose Legendary Tweed couldn't be any easier. Simply plug your instrument in and you're good to go. There isn't too much control available over your tone, but you can get some overdrive tones right in the box. This is an amp that is made for both beginners and beyond, so even if you don't have experience with guitar amps, this will be an amp that you should be able to figure out how to use without the assistance of a manual.

For a small, portable amplifier, the Pignose Legendary Tweed has a pretty impressive sound, and is one that can get pretty loud despite its small stature. Don't get me wrong, this definitely isn't suitable for anything other than practicing and maybe recording on occasion, but for these purposes this is a killer little amp. I've used the amp with a Fender Stratocaster and was overall very surprised that I was able to get some tones that I didn't expect to get from such a small amp. As far as portable amps go, this is certainly the best sounding one that I've used.

If you're looking for a small portable practice amp to get you started, or even just for portable practicing, the Pignose Legendary Tweed is a great deal. I'd even recommend it for the player who wants a cheap practice amp, regardless of if you want to bring it around or not. It is a tad more expensive than Marshall's MS-2 portable amp, but is worth it as it can get louder and overall sounds much better. Overall, the Pignose Legendary Tweed is in general one of the better deals out there for a guitar amp.
Did you find this review helpful?yesno
»