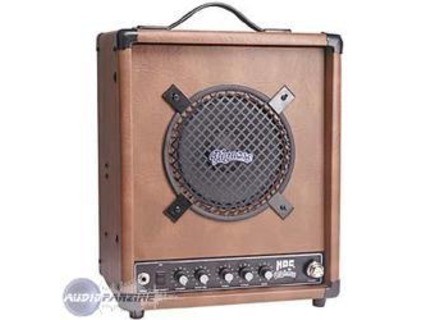 Its main advantage is that it works with a lead battery. So you can play for hours without AC connection.

The amp is provided with a big external battery charger.

The fact that the controls are placed on the bottom instead of the top is a real problem. It isn't an issue when it's on top of a table but it's very annoying when it's on the floor.

The battery has a very long life. It has happened several times that I forget the charger at home when I take it to rehearsals and the battery life was long enough to finish the rehearsal.

The speaker efficiency and output power easily allow you to play it with other acoustic instruments. My dream was to play on a hill under a tree with some friends playing acoustic guitar and djembe. The HOG30 made this dream come true.

Very good sound. I use it with an electric bass and the sound is ok although its totally different from a big bass amp.

I connected an MP3 player once and the sound was awful. So this amp doesn't sound flat at all. I use it for bass guitar and that's it. It suits my needs perfectly.

This product has no competitor if you want to play without an electric generator (at least none that I know of). Thanks to its generous battery this product is perfect for that. I don't regret this purchase and I recommend it.

If you are going to play someplace where you have access to AC outlets you'd better buy something else (and thus you would avoid carrying a heavy battery with you).
Did you find this review helpful?yesno
»

Widower's review (This content has been automatically translated from French)

Pignose HOG 30
5
This amp is a 30W RMS transistor, even when it is strong enough: in my room I rarely 9am Exceeds more than enough for each other.

At rglage difficult to do more simple: volume, master, and 3-band EQ, with the knob-shaped snout and dye to turn the amp! Also, in addition, a button "Funk Bass" which really boosts the attack. But it's almost too easy: no reverb! That's why I do not note the max.

From a Jack, a derrire other, possibility to use a headset. The transformer has a 120/240V switch, and a Pignose battery intgres that allow it to take 3-4 hours away from any wall outlet. Dplacer easy.

! Edit! : I would like to prciser even this is not REALLY an amp travel! It's a real amp! I do not understand is why it is so class. Its batteries allow him to take a while, but given the size of the beast (60 x 24 x 67.5 cm and weighs about 12kg) there must be error (^^). It's a real amp and the sound is well above any amp trip.

It could not be easier! We are in the pure "plug N play" is adjusted a little legalization and roll! In addition, this amp accepts all types of instrumentals: guitar, keyboard, bass. Personally, I use it much with the guitar with the bass. No need for manual to understand anything.

But the method is difficult Grable Funk Bass: It really boosts the attack and we need to avoid too bourrines as a slap infamous Manir. A completely avoid the slap.

Batteries can be exchange and are not ncessaires the operation of the amplifier.

The sound of his East plutt Pignose is clear: it gives a guitar sound trs soft and warm, apprciable for the game to the finger, a sound good for blues or funk. But plugs directly into the Pignose it will be hard to leave. Never attempt to do so even cruncher, it will come out as the clear sound. You better have good pedals and a multi-purpose, the Hog 30 is the well plutt (DS-1, MT-2, OD-1, Tube Screamer ...).

I would say that it is especially with the bass that feels more than the Pignose has potential. Trs a good sound slap on the finger like, and not too prcis typ enough to play all types of music. It feels right even though the low HP for a 8 "but not enough to shake the mrs. This is not a point ngatif, trs sound is fun! Mode Funk Slap sounds really finger finger nags but beware.

I use this amp for 5 months and I prfre by far my Marshall MG30DFX. The clean sound is really good, but it takes pedals to get a good crunch or distortion. Basically the same amp it has a well and it did not come out unless you put effects on it. My biggest regret is the lack of reverb intgre.

Excellent qualitprix a mid-range amp, I got it second-hand and if I had the choice again I would do it again without hsitation. In my opinion the HOG-30 has as much to him, and it is convenient to carry, neither heavy nor bulky it fits easily under a desk. The battery is not bad, but you will not be useful if you play on the beach or other place where the current is not accessible, which should not happen often.