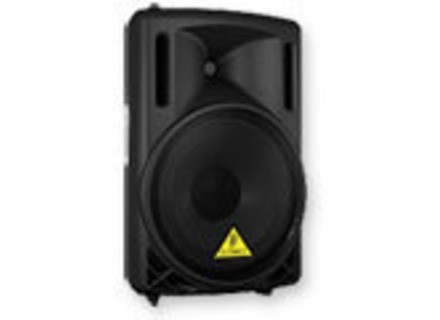 Behringer Eurolive B212D
5
I actually use this speaker as my guitar amp. Since I play through a Line 6 Pod XT Live amp modeler, I needed something with an absolute flat response, and be crisp and clear enough to hear the subtle differences in the digital cabinet models. I also needed power. Lots of it. I had been using a pair of Alesis M1 Active studio monitors for playing in the home studio or occasionally in a very small venue, and the response was perfect. I had the cleanest signal I could want, but studio monitors are not made for a large stage. Guitar amps were out since they color the signal, I tried a keyboard amp which was a disaster so I made up my mind to buy a powered PA speaker. When I went to Guitar Center, they let me play my rig through the various speakers on the showroom floor there. I played a JBL 15" first, which seemed pretty decent. Definitely had the power. Next I played through the Mackie Thump and it sounded as if someone sliced the high end right out of it. Then I played a Behringer B212D. The clarity of the sound as compared to the JBL and Mackie was so completely obvious from the first chord that I knew I was going to walk out of the store with that speaker. Even the salesman was surprised at the difference, especially considering that Behringer is considered 'lower end'. In any case, I've since used it at many gigs and have been absolutely thrilled with the performance. I can crank it past the level of human tolerance without a hint of feedback and there is almost zero line noise at those high volumes. I do have to turn the bass way down on the EQ as it can 'muddy up' with the bass player. But other than its perfect for what I use it for. If I had one miniscule complaint it would be that it should have a power indicator light on the front so I could tell if it was on or not as I use it on its side as a wedge.
Did you find this review helpful?yesno
»

yannmbp's review (This content has been automatically translated from French)" Fine"

Behringer Eurolive B212D
4
I use this place for about a week.

This is one of the first models I bought, however I have heard before (JBL Montarbo ...)

The fact that it is amplified a good point: if one of the two loose full benefit, the other still works.
It is quite heavy, but this is normal as it is amplified.

The sound is quite good and the high / low equalizer is appreciable. The sound is still better with a real EQ or processing computer (which I do). Bass response and sound is fairly well defined.

In short, a good price / quality ratio, although I bought it a little expensive for the occasion.
With experience, I think the choice again, but I will give my opinion after my next party!

Behringer Eurolive B212D
4
How long you use it?
1 year


What is so special that you love the most, least?
What I like most about these speakers is that it is small, light for their size and equipped with an HP 12 "which makes the bass very much present.
They can be used in front and back, and their stroke 400W RMS for a year I had the opportunity to grow on DJ nights with 100 people and the sound is clean and they do not report saturation (the LED signal remains green)

After saying what I like I will still speak of their faults, that, considering the price, remain fairly forgivable:

They are very directional, which is not a defect if used back in front but a bit anyway because we can not uniformly cover the public if it is very close.

It must be corrected with the controls at the rear of the enclosure to get a good consistency between bass and treble, but say with the bass at 10 and HI to get a 2h is its quite nice and clear.

How would you rate the quality / price?
Unbeatable, if you think that the price you have Gemini or Ibiza sound ...
I am a sound engineer and I think for a product at this price is quite ca very correct, it does not have the finesse in the treble of FCR but it cost two and a half times cheaper and was more low.

Behringer Eurolive B212D
4
I use it for one month, I can not compare with hardware more expensive but excellent value for money. I use it for my back and repeat for concerts bars. Used just to sound to the song of a group of blues-rock, it is really powerful and sufficient in this framework. 350 Watts true, it sends what it takes, the flat is the wrong balance between bass and treble (too serious), so I set the equalizer based directly on the back of the enclosure. I expect to obtain a mixer later then this concern will be paid directly via the table with effects. I have a small budget, but Behringer makes really solid so very satisfied and more, 3-year warranty on the dealer's site (I do not take too much risk). No breath parasite, well built and solid walls, light for its power and bowl 12 ', double carrying handle and mounting set for mounting on standard feet.

Did you find this review helpful?yesno
»
Read the 7 user reviews on the Behringer Eurolive B212D »