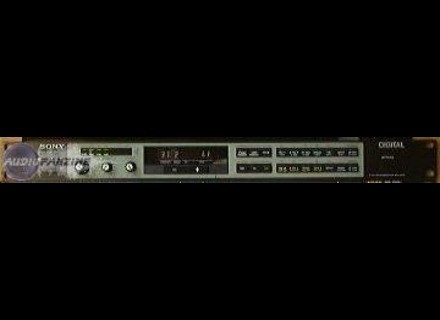 Sony MU R201
5
The Sony MU R201 is a vintage stereo digital reverb and multi-effects unit and is one of the first of it's kind. It was made in the mid to late 1980's and has stereo 1/4" inputs and outputs as well as MIDI connections and footswitch controllers as well. It is rack mountable and will only take up a single space.

Navigating through the Sony MU R201 can definitely be a bit difficult. I'm glad that the person who brought this into the studio that I work at actually knew how to use it, as I wouldn't be able to use it on first sight for sure. You can toggle between different sounds pretty easily, but beyond that I don't really know how to use it well. Perhaps given a situation where I had to use it on my own, I could rise to the occasion, but I've yet to have that chance. The manual might be helpful for someone new to it.

The Sony MU R201 has a really great overall sound for a really early on digital reverb and effects unit. I've only heard the reverbs on here and haven't jumped into the other modulation effects since I don't have access to it. Having said this, the digital reverb is absolutely some of the best that I've heard and I can understand why the engineer brought it around as he did. It's not as warm sounding as something like our plate reverb, but for the sounds it can get it's definitely an awesome unit.

The Sony MU R201 is rare, but it's one of the first of it's kind, and a great place to start at this. This is definitely better than a lot of rack mountable digital reverbs being put out today and definitely has a lot more than just a nostalgic factor. It's probably going to be pretty hard to find one of these, but I'm sure they are around from time to time. I guess not too many of them were made or something. Either way, it's a worthwhile digital reverb to look into for professional engineers and studio owners.