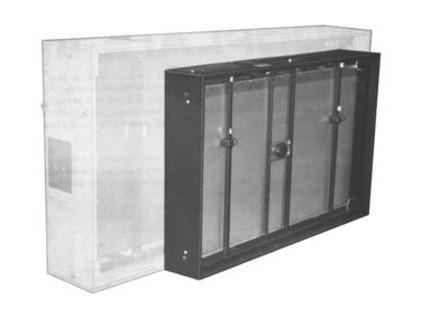 Studio Technologies Ecoplate II
5
Studio Technologies' EcoPlate II is a real plate reverb that is to be used in the recording studio. On the EcoPlate itself, it says it was made by Programming Technologies, which was some sort of a subset of Studio Technologies. We've got one of these at the studio where I work, and it's definitely some of the best sounding reverb that I've ever heard. For those who don't how a real analog plate reverb works, it's actually a huge plate that sits inside a box and wavers to give you reverb. Many studios will have their plate reverbs in the basement or in a remote location compared to the control room, but we've got ours right outside the control room door. This is similar to the EMT 140 plate, but is actually supposed to be improved, although having used both of these I don't think I'd be able to tell too much of a difference. We have this hooked up to the patch bay, so I'm not really sure what kinds of connections it has on board. This definitely isn't rack mountable!

There isn't much at all that you need to know about using the Studio Technologies EcoPlate II. We have this hooked up into an auxiliary channel on our Neve console, so you just set the level of how much reverb you want on the board. There aren't any parameters or anything. A manual won't be necessary unless you're having a technical or set up issue.

Without a doubt, save for an EMT 140, the Studio Technologies EcoPlate II is the best sounding reverb I've used to date. It just sounds so real and natural. It's almost hard to describe the depth and fullness of this reverb sound, but as soon as you hear it applied to something, you'll understand completely. The EcoPlate II, and plate reverbs in general, are great for a variety of situations, but I especially love using the EcoPlate on drums, vocals, and electric guitars. Having said this, the EcoPlate II is going to sound great on whatever you use it with.

There definitely aren't too many Studio Technologies EcoPlates out there anymore, as it would be somewhat hard to get your hands on one of these if you wanted to. They are pretty old and must be pretty hard to maintain since they are so big. I also doubt that there are many technicians out there who could work on this if you did have a problem. Luckily, where I'm working has one and it definitely sees a lot of use. If you're ever in a studio that has one of these and you need some reverb, this is the best you're going to find anywhere!
Did you find this review helpful?yesno
»