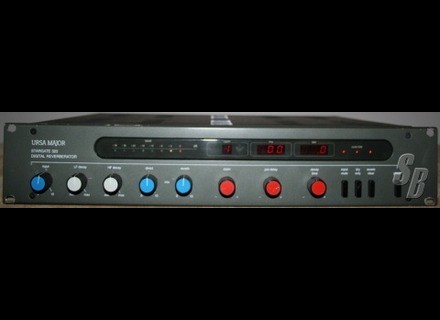 blackle's review (This content has been automatically translated from French)"I thought I had heard everything .."

Ursa Major Stargate 323
5
Digital reverb of her condition, as its name does not indicate the Stargate 323 has a bandwidth greater than 15 kHz, since its sampling frequency is 32 kHz on a rather special quantification of 15 bits. The inputs are either symmetric or asymmetric in. I do not know the year of marketing of this machine, but like that with a ladle, I would say it was probably designed in the early 80&#39;s.

First, the machine is more like first hand to a kind of "weird, I n&#39;sais not what for" analog, which means it still seems easy to use immediately, rather like the Lexicon PCM 60, so she immediately seemed familiar to me, as I had never used. It offers little control on its facade, but there are still the indispensable as:
A rotary-gain, which adjusts the levels of left and right inputs (it works in stereo). The modulation is displayed on a peak meter for immediate control.
Potentiometer-called "LF Decay," in fact it is a serious filter to compensate the effects reverberate barrel or lower frequencies, as getting what one wants. The slope of this filter is probably 6 dB per octave ..
-Another knob "HF Decay" which is I put it in the mile, is a second filter, but this time for the upper spectrum. Its action begins in the middle to 3 kHz. It can refine the color of the reverb and avoid general sensations including noise logs, pre-emphasis of sibilance or pops on resonances. This is very useful for reverbs that have over thirty ..
A-pot "Direct" which adjusts the percentage level of the input signal from the processed signal, one could call it "balance" too, except that "0", the effect is maximum but pseudo-stereo, whereas "10" stereo is retained to preserve realism more evident. In fact, at 0 depth is more pronounced with a direct signal distance, so no precise location. In the situation of 10 sources in space corresponds exactly to the stereo signal sent to the input but with less depth. The pre-delay reflections etompées recover. This control EGIT like a zoom subjective.
- "Reverb Mix" = balance ..
- "Room": this control, the other two COOMe following are notched and provide a durable adjustment over time. The "Room" to view the programs (eight in number) selected. Provided that the first is specifically for the simulation of small rooms with a maximum time of 2 seconds can decay, while the latter takes up to 10 seconds and offers more opportunities to establish large areas.
- "Pre-delay" setting is 0 to 320 ms in steps of 10 ms
- "Decay time" from 0 to 10 seconds depending on the selected programs. In fact, we can summarize the effects depending on the programs as follows:
1: Plate, maximum 2 seconds
2: Plate more developed than 3 seconds
3: Rooms diverse than 4 seconds
4: Large Room, maximum 5 seconds
5: Small Hall, maximum 6 seconds
6: Large Hall, 7 seconds maximum
The program 7 and 8 in turn specialize in long-term effects of space, with a decay of 10 seconds max.
A button called "Clear Reverb" Reverb cut but allows the signal before processing.

First of all it should be noted that power is only if we perceive a distant breath pushing levels, the impression is very positive start. For my part after a few hours of use, I think that this studio is a great backup device "vintage" effect to work on time. I really appreciated the holding of this amazing Stargate including 323 on percussion. The weakness remains incredibly regular, it is really to emphasize because I know a much reverb known and still very popular, AMS RMX 16 not to name it is not as good on this side that the Ursa Major; only few redundancies perceive themselves to long times, it&#39;s pretty normal here, but be aware that the so-called comb side reactions are not and never have been prohibitive and may anyway be corrected in part, to the using filters "LF" and "HF" which are particularly effective in this machine.
Flicker at high frequencies inherent in these old machines (here they are not pronounced anyway) under the same conditions subside. The reconstruction of natural acoustic is quite credible as long as not to overload the sound sounds rather artificial but in a good way, that is approaching the plate above devices well known .. Very artificial reverbs for this bike is against a real gem, we literally carrying the very distant galaxy Ursa Major and it falls pretty well.
However, I regret the selection of pre-delay in steps of 10 milliseconds, for times exceeding 40 ms it can be a little tricky sometimes, but in return all hazardous experiments are reduced accordingly.

In studio session, I chose one day to dig up that old, well I can, because it not only allows you to work quickly and efficiently, but also it can get very dramatic reverberations and incredible originality of It is the antithesis of current reflections, namely the effects straight out of the greatest films of science fiction. And it is certainly his main interest.
This machine is part of the exclusive club (and refined) products known as "vintage", it is essential to try to understand why ..