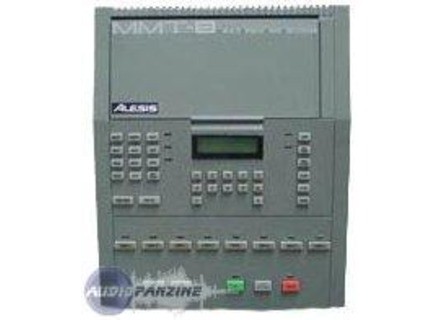 All user reviews for the Alesis MMT-8

Average Score:4.2( 4.2/5 based on 6 reviews )
Value For Money : Excellent
Not satisfied with those reviews?
Our members also liked:

Gabrioche's review (This content has been automatically translated from French)

Alesis MMT-8
5
You know CHARACTERISTICS.
It's an old machine but I find that there is enough memory and CONTRL.
No sounds, no style, no effects.

The buttons are worn with time trend. A small cleaning contacts with toothpaste and a graphite lubricant sufficient to provide nine (mtal brush the plate contact with toothpaste, clean and then gently brush with super fine steel wool. Then , coat the rubber washer black with a thick layer of graphite lubricant. Attention is black and marking, therefore, use a Q-Tip)

You can not call in not not, it's a shame and it is the only ngatif my opinion.

What I like most from this machine is its simplicity of use.
Everything is extremely simple base. Squence are very easy to edit. If a track does not flat, it can be again by pressing three buttons.
All parameters are easily ACCS!
The manual is short and clear and almost useless.
Only weak point: not impossible to accommodate in it.
Indeed, it is quite difficult to play a fast bassline (like TB-303) in real time. However much the APRS quantify, is often your exact ALTR. You can always play bass on a slow tempo but becomes somewhat tedious. Remdier to the situation I got an old Yamaha squenceur, the QX SERIES, bought $ 15 on eBay.

I can not say that sounds are suitable particulirement my style of music.
Otherwise, the trs squenceur suits me well.
Should indeed for any style of music. Tehno, trance, house (Orbital). Personally I play which is similar to the progressive electronic trs well and I get to make me dbrouiller squence arpges and the "Tangerine Dream".
The expression is good trs my opinion, it records everything that made my keyboard, what more?

I for six months.
What I like most is its simplicity.
In its lack of squenceur not is not a default. But I live with!
I never used to squenceur hardware before, except that of a workstation. I must say that the dtest squenceur software; far too complicated I prfre 100 times a squenceur hardware, much more dynamic!

Trs good report quality price. Ensured under $ 100 on eBay!
Oh yeah, I would do the choice!

julienvoirin's review (This content has been automatically translated from French)

Alesis MMT-8
5
Thru MIDI In Out, In Out Sync (to sync to a Portastudio for example), Click out, power in, footswitch start stop.
100 shares (of 694 black if desired), with each unit containing 8 tracks (these tracks will then have all the same length). In total, then 8 x 100 units possible.
99 song, the songs are a sequence of units.
16 channels on each of the eight tracks.
Edition not only not possible for FIX (can not enter the notes one by one).
Memory of 11,000 notes. K7 backups (no kidding!) Or SysEx dump (in both senses of the computer to the machine, the machine to the computer).
Today there is editing software MMT8Ex.exe paying only PC. Existence of several ROM (firmware) each with advantages / disadvantages.
For those who do not have the original adapter, do not worry: unlike inaccuracies read below, you can supply it with 9V DC (there is a diode-wave recovery, which allowed the Alesis 'AC power, cheaper at the time, photographs and drawings available mmt8.com). I personally use a universal power supply (what is typically found in supermarkets) adjusted by debiting 9V 500mA max and it works very well. (Put inside the + and - on the outside, otherwise no juice)

Use super simple once you understand the philosophy of the beast (enter button = red REC). Against by not undo. Everything is in front, very logical and basic (copy, dump, click, BPM, part song, edit, merge, etc ...)
Quantification in 1 / 64 only, very well for the binary electro (but quantization is disengaged).
16 channels per track possible merge between tracks as possible, with a little imagination you can make full use of the bike. Can duplicate a pattern on the same track, useful for increasing the beat juggling.
Setting the length of a black pattern in the hand of a black 680 and some.
Recording on the fly possible (drop in).
Twelve o'clock, or internal ext sync (with diffusion clock noon), and external sync via a magneto (obsolete today).
The manual is simple and clear. There is a memento in the cover MMT8.
Sequencer derived from that of HR16 (BAR) in the beginning, so if you like TR management pattern you will not be disappointed.

Possibility of filtering: midi channel, DC, notes, aftertouch, SysEx, velocity.
Quantification assignale: 1 / 2, 4, 6, 8, 16 ... 64.
Muxage (merge) two tracks on one possible.
Warning NO UNDO!
Responsiveness of the keypad a bit long (must press the buttons)
The click is deactivated by a menu (no need to go fiddle with the inside of the bike as I read on some sites).
My advice: choose from such as banks (99!) And each track as a pattern (it still 16 channels). Use the merge to write her reasons.

Used for two months, the long-awaited tool to run patterns without having to use the external sequencer of my Machinedrum. It is used for sequencing of sentences recorded from my master keyboard to my destination KS Rack. Then I jam without keyboard triggering patterns from my or my Machinedrum MMT8. The only snag in mmt8, no external midi implementation, we can not control it from an external controller (at least it's not documented in the manual).
Today at 50 euros secondhand is a tool really handy and very cheap. He replaces Ableton Live, and allows me to be creative by its lack of visual interface (sound, just sound).
Another advantage is that it displays the result from the time beats, possibility to name the patterns in 16 alphanumeric characters.
Attention to memory management, especially if you tweak bcp. While thinking about dumper.

when information overload by noon, he went into a spin by generating sequences of MIDI control, sending sysex random, a marvel of hell, when the spin in all directions (noon without loop filtering of the data es)

Seq type pattern:
it shows the number of measured and recorded. is clear and effective possibility to eight channels simultaneously with a function of erasure marks Notes etc. ...
it's not good for a symphony but for the price to replace a groove box or internal seq mode not working pattern.
is mute unmute a track by pressing the button on the track ...
if it's not good rather than editing, we replace
mine remembers a paterns extinction ..... it seems that normally it is not the case ...

Seq is a not the sound but feel the stuff in midi data useless, and twist it (certainly it is random), connect your recorder is not ... but some of Aphex Twin sound bugs in utiliss mouse on mars easily find themselves ....
info for a gun does not do this kind of manipulation since the time ... me, it would crame long ....

Extra Extra as seq from complement live or studio tricks to make enough or wise choice delire
use it with an old dear adapter (ac and not dc) but otherwise it's reliable and efficient square
the user manual is on the cover directly incites or is registered alesis (hop mode is opened and employment is strong and ...............)
it's a great support cell hair at the size of a SU10

Willty's review (This content has been automatically translated from French)

Alesis MMT-8
4
See more advice for CHARACTERISTICS. I put 7 for his age!

There's nothing easier to use. The manual is self-explanatory. I have a multitrack Fostex VF160 and I needed a MIDI recorder to record my trigger bass drum and snare drum. He fills this role perfectly! I put 9!

The edition is fairly easy despite the small screen

I then used plusiseurs month, I pay between 40 and 60 euros (I can not remember!) And for that price, there 'no photo, I would do this choice. INVINCIBLE is the stuff!

Fenschlive's review (This content has been automatically translated from French)

Alesis MMT-8
4
8 tracks mutable
relatively edition complte and trs East "time rel"
In the era there was no better for looping ...

Very easy to understand ...
Edition no not a bit more laborious, but very simple and intuitive
I learned everything with this sequencer ..., O)

I do not know if all the rubber buttons on the machine have aged well but it was a great product the era ...
If you find one in very good condition, you can initiate small cot in the world of sequencers.
It was not worth a Roland MC500 but it was much easier to use and many more live on the east.

Tib-tib's review (This content has been automatically translated from French)

Alesis MMT-8
4
Sequencers for 1988, registration noon, 8 tracks, with programs, cut manual, I put 7 of 10 at the time, alli with her sister the 16-hr bar ctais really cool as learning

Very easy to use, very accesible to all, if you find it in OCCAZ it can be a good learning for a beginner

With the experience I remake this choice