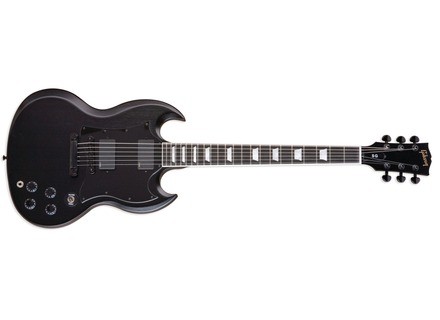 Gibson SG Special EMG
5
This model was discontinued pretty quickly. Big companies like Gibson dont like putting other peoples pickups in their guitar if they dont have to. This guitar is a super guitar if you can find one. They only made a few hundred of these, I dont know why because they would sell forever. This guitar is pretty much an SG standard with a set of EMG in it. You get a mahogany body and a mahogany set neck with a rosewood fretboard. The bridge is a standard tune-o-matic. The pickups are a fully active set of EMG's. You get the standard Zakk Wylde set of EMGs in this guitar. You get an 81 in the bridge and an 85 in the neck. The controls are standard as well with a volume and tone for the neck pickup and a volume and tone for the bridge pickup with a 3 way switch.

The playability on this guitar is pretty good. The SG standard is a good workhorse guitar. The fret access is pretty good due to the SG shape. The neck profile is nice like a typical SG it isnt too big like some other Gibsons. With the neck mounted so far out on the body and the body being so thin and light, SG's are prone to neck dive. When playing an SG standing up you may find yourself holding up the neck due to this awkward balance between the neck and the body. The body has more contours than that of a Les Paul so your arms rest on it better and it does not have as sharp an edge to it like a Les Paul.

The 81 and 85 pickup set is a very common set of EMG's. It is also known as the Zakk Wylde set because he was probably one of the earliest adopters of the EMG active pickups back in the 80s. The 81 is a good bridge pickup. Just about everyone who uses EMG pickups uses the 81 in the bridge. It has a high top end cut to it which allows it to retain clarity even with a ton of gain in the sound. The 85 in the neck is great for high gain leads. It has more low and and a bit less high end than the 81. It has a smoother sound which allows it to work better in the neck position. You can do high gain leads with the 85 without it becoming harsh and what not. The 85 is also good in the bridge if you want a thicker tone. Since it has more bottom end it provides a thicker tone than the 81 but with slightly less top end clarity. With EMG pickups you can do the 18v mod to give them a better clean tone. Stock most EMG pickups do not have a very good clean tone but with the 18v mod which has you run them on two batteries instead of one, you can get an more organic clean tone and more headroom.

This guitar is great for metal. A lot of Gibsons metal image guitars are not that great for metal. For the longest time their gothic guitars came with standard pickups and things like that. Every once and a while Gibson will get it right and when they do you better be on it because they usually do not last very long. They will make stuff like the Melody Maker or the Zebrawood SG forever but with a good guitar like this they are one and done.
Did you find this review helpful?yesno
»

Gibson SG Special EMG
5
If I had a book with every Gibson model ever made im sure 90 percent of the guitars would be models that they only made for a year or two. This would be one of those guitars. This is a great model that only lasted for a short time, probably because it was too awesome. It is a pretty simple model too. It is a SG Standard with EMG pickups. The standard Standard is pretty standard in its equipment. The guitar features the classic dual cutaway SG body with a 22 fret neck. It features dual humbucking pickups selected with a 3 way toggle switch and two tone and two volume knobs. This guitar has some upgrades. All the hardware mentioned is black and so is the finish. It has EMG pickups instead of the passive Gibson pickups and an ebony fretboard which matches well with the black finish. The EMG pickups are active so they run on a 9v battery to produce more output and clarity. The pickup models are an 81 in the bridge and an 85 in the neck.

Playability wise this is pretty much a standard SG. The SG was designed in such a way to give better fret access than the earlier Les Paul. The neck is not mounted as deep into the body as is with the Les Paul. This design gives it a few problems. The neck joint on SG models is very weak compared to Les Pauls or even bolt on guitars. This weak neck joint makes some SG's prone to going out of tune. With the neck mounted so far out on the body and the body being so thin and light, SG's are prone to neck dive. When playing an SG standing up you may find yourself holding up the neck due to this awkward balance between the neck and the body. The neck on this SG is ebony compared to rosewood on most SG guitars. This provides a smoother feel under your fingers.

The EMG pickups make this guitar a real beast when it comes to heavy music. The 81 in the bridge has been an iconic metal pickup for decades. It has a high end crunch and distortion that gives it clarity no matter how much gain you are using or how low you tune. The 85 in the neck is a great pickup too. It has a more fuller sound than the 81 so in the neck position you can get fat lead tones. The 85 is also good too in the bridge. With EMG's quick connect system you can easily swap these pickups position without soldering anything. The 85 in the bridge produces a super thick tone and cleans up better than the 81. Speaking of cleans if you do the 18v mod on the EMG's. With the 18v mod you run the pickups on two batteries instead of one. This provides a more organic tone with more headroom. This tone produces better cleans than stock EMG's and clean tones are usually the weakest part of the EMG sound. Gibson now has their own brand of active pickups so I will not be surprised if they put out this guitar again except with the Gibson brand pickups.

The horn cutaways on an SG give it a real metal look so with the metal electronics it fits perfectly with heavy music. Gibson should make models like this standard. They have put out 67 reissue V's and Explorers for like 25 years, why not make one of these models for a few years and get some out on the market. If you are looking for a really metal SG without having do get one of the silly Gothic models this guitar is what you want.
Did you find this review helpful?yesno
»

Published on 01/17/08
Vigier Guitars has redesigned the Arpege Bass.