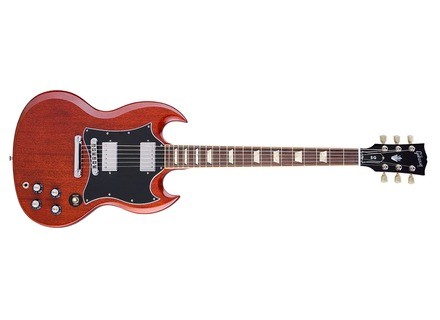 Gibson SG Standard
5
George's Music Berwyn PA, I paid 1050 dollars for it new. I had a big problem finding one and had to drive two hours from delaware to pick it up, I wanted to buy one down here in Delaware but no one had one in stock and it takes a while to order from gibson, 3 months and up...

This guitar is simply gorgeous, I mean you have to see it to beleive that people make equiptment like this. The inlays were amazing looking, the headstock was just detailed and beautiful, its nice and light and has beautiful hardware. The finish shines perfectly, and the cherry color is just fabulous. The wood is just great looking. It came in a beautiful brown case with a pink liner...which I could have done with out, but if anyone buys an 03 or newer they get black with grey inside so that solves that one physical aspect. It sounds amazing plugged in, and I had to lower the action somewhat to get it to where I like it. It requires SOOO little force to get great tones, you could go so fast on this guitar its not even funny!

Its beauty is its greatest stregth and weakness, it requires alot of upkeep to have it look new. Heat changes really effect it too, you have to let it get used to the temp before taking it out and playing it, I have one finish check from my lack of care in the first weeks, but it is worth all the effort to own somthing this nice, I had one other problem with this guitar the notch for the sixth string is not big enough to hold it so in hard playing it pops out, you can fix it with a file or a new bridge so its basically a non issue, I love my baby none the less! Some say the neck is too thick for thier hands and its wide, but it just makes it a dream for speed. Its personal preference I guess, but I love it!

Its just such a nice guitar, some people say you can buy a cheaper gibson and its the same, my brother owns a sg voodoo seris which cost 950 only 100 less than mine, there is no binding, or laquer finish, and it feels sort of the same in your hands, just like the faded sg's, it is about the same to play, but it just feels cheaper, it no inlays, binding, glossy finish, pick up covers, headstock inlays or any of what makes the sg stand out so much, gibson on the headstock is just a decal on the voodoo, and on the sg standard its a perloid inlay that looks fantastic, I say dont go cheap, spend the 100 more dollars or even four or five depending on the pricing in your area and go for a standard, it is well worth the money. Its the best decision I have made in years, and dont listen to what gibson haters out there say, they just cant afford one so they complain about them like thier junk. I will end with this, a gibson is the greatest guitar you can purchace, and if they say its too much of a premium price I say who cares, if you keep it five years its still worth what you paid for it, its a beautiful investment that will make you smile every time you look at it.

heads on fire's review"It's a classic for a reason."

Playability is a dream on an SG Standard. The double cutaways are very deep, and the neck joins the body near the end of the fretboard, closer than on most guitars, so fret access is sublime. The neck feels fantastic, as if the carve and fretboard radius were built for my hand. Controls are easy to reach, yet plugging in a straight end cable is a tad annoying, as it juts out near the controls. My guitar has a Maestro Vibrato system, and it is great for subtle Bigsby-style vibrato, with a severe helping of cool. It's a classy, yet edgy looking guitar.

This guitar is bold and aggressive, but can be smooth and subtle. The inherent acoustic resonance is undeniable - you can feel the guitar vibrate in your hand, probably more than any other guitar I have ever played. Bridge pickup tones would cut through a steel bank vault, with all the bite in the world, yet all notes and chords retain a crystal clarity. The neck pickup tone is thick and singing, which is what you hear on the early Santana records.

This guitar is fantastic, a true classic. There is a reason why this guitar is one of the most enduring and iconic designs of all time - it rocks! The SG Standard is a true winner all the way around, and I would recommend that every guitar player try one out at some point.
Did you find this review helpful?yesno
»

Gibson SG Standard
4
I have been eyeing a Gibson SG Standard for quite a while now. I picked this one off the wall at GC in Texas and I fell in love. The coil-tap is sweet but it isn't perfect and to be honest if you are truly looking for that single-coil tone then just buy a Stratocaster. What it does provide is the ability to gig with one guitar and get darn close to that true single-coil sound when you need it.

The finish is beautiful, I have the Vintage Sunburst and I love it. The sounds are bold, cutting and pristine. They shine on solos they just have that ability to cut through the band. Many of my band members thought I spent much more than the retail price. The neck is amazing smooth and comfortable. The binding is beautiful and adds to the authentic look and feel of the Les Paul. Just in genereal the feel of this guitar is great and it has a really nice color to it as well. I think this version comes in a few different colors.

The guitar is heavy don't discount that if you play long sets. I am used to a relatively heavy guitar. This LP isn't chambered. which is something that I enjoy. I feel that chambering, although reduces weight, calms down sustain. This baby will hold a note while you grab a sandwich and when you get back it will still be humming.

The overall sound of the guitar is everything you would expect from a Les Paul. Every note shines through out of this instrument. I play it through a Mesa/Boogie Mark V and it basically sounds as perfect as I had imagined it would in my head. You can never go wrong with a Gibson, I definitely recommend getting this one. The SG Gibson Standard is at the top of its class.
Did you find this review helpful?yesno
»

I had this guitar for 10 years now, and I've used it with a lot of different amps, cabs, effects etc.
I recently changed the stock pickups with Bareknuckle ones.
With the stock ones it was quite acid and "trebly" but I changed my tuning to D standard and with the new pickups it's a rock/heavy rock machine.
It can easily goes from clean Jazzy dark tones in the neck position to heavy rhythm and sharp leads in the bridge position.
I've toured a lot with this guitar, and even with the standard tuners and with a 11-52 set of strings it maintains the guitar in tune for a lot of time.
A great guitar for blues too.

This a guitar that today can be found for a lot less money from 10 years ago. My advice is to try it before, especially if you buy it used, I've read from various sources that the Quality standards from those years were a little bit up and down.
If you find a good one, however I strongly advice to take it, it is a rock monster, that can easily cover a lot of ground even with the stock pickups, great value for the price of it, I would easily buy another one in an heartbeat.
Did you find this review helpful?yesno
»
Read the 89 user reviews on the Gibson SG Standard »