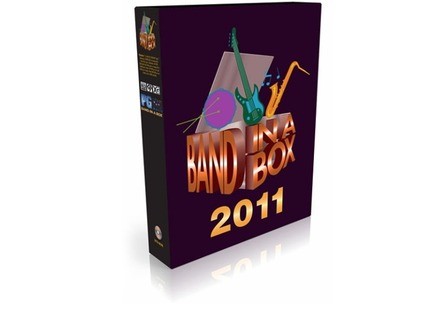 PG Music Band In A Box 2011
4
PG Music Band in A Box 2011 is the desktop version for Windows. Band in a box has a lot of cool things about it that makes it very appealing to most home musicians. It is an all in one studio with no need for any external stuff. The manual is very easy to understand and it is actually a pretty thin manual with not a lot of instructions to it. The program is pretty self explanatory and easy to understand and use. Everything worked great with my Windows Desktop and I have not experienced any issues or crashes with this software. Using Band in a Box isn’t something that I recommend if you are into a lot of external plug ins and syncing up a bunch of gear. Band in a Box seems to me that it really wasn’t built for those stages of the musical process. There are far to many issues that I have when trying to use it has a host for other gear.

The software does work great in its configuration and hasn’t failed me yet, until I start getting into plug ins and routing other programs though it. Then I can experience some lag and freezing issues. But that only happens when I bring some other programs into Band in a Box.

The thing that I like most about it is the price, it is very affordable and is a great starting point for someone who is just getting started in creating music digitally. If you want something more in depth because you are not a beginner than I say stay away from it and invest a little more money for a better program. I have tried band in a box the 2004 version and it is pretty much the same as the 2011 version to me. They both work great, but have several limitations has to how far you can push them.

PG Music Band In A Box 2011
5
Problem-free is a small 160g dd, simply to transfer
I have the 2011.5 version, I never read manuals, I prefer the forums. But help seems very adequate.

Dual core 2.4 4g RAM, 3b, cs edirol
The software is not very hungry
The config is stable.

I went through many versions of BIAB but this version 2011.5 with all realtracks, it must be 3 months.
It is (to my knowledge) the only existing (with realtracks)
What I like most is that you write an agreement, you choose the style and it sounds, I was using before MIDI but it was really a lot of work to assign sounds (to approach the sound of the instrument.)
For music I do (rock / pop), it is ideal, it's like having a group of sizes (this software is alive)
Here are the musicians who play (it is true that some agreements sound bizzare, and drum sounds are more or less the same)
The only criticism we can do is he can not separate the components of the battery (reverb on snare for example) the sound of the musician can not really be reworked, but the possibilities are enormous I think I ' have explored in 5%, and the more I'm not a musician (I play the guitar very badly)
The value for money is very good (it cost me 300 euros with all realtracks and customs fees included)
I not only remake that choice but the more I buy regularly updates and new realtracks.
Go listen to the demos on the site
The day they come out of realtracks sections of copper and violins
this will be the best software (for songs) in the world.
Oh I get carried away a little.
I could talk about this software all night but it's late.

PG Music Band In A Box 2011
5
I received the CD in two days in Belgium, the installation is trouble free. However it must be applied the update available on the publisher's website which among other fixes the connection with the Iphone

I'm running Windows 7 and I had no adjustments to make.

For two days and if I had to do a chix, I do not come to the idea of ​​taking another product.
There are not many race condition on this sector
Did you find this review helpful?yesno
Cookies help us improve performance, enhance user experience and deliver our services. By using our services, you agree to our use of cookies. Find out more.