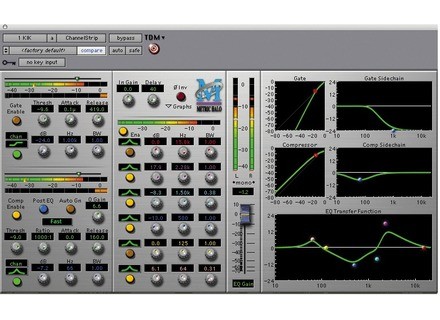 Published on 08/09/09
Despite the preponderance of exceptional drum samples and loops on the market, for certain genres of music (notably country and rock) there is no substitute for a great session drummer playing on a w…

Metric Halo CHANNEL STRIP complete
3
I run this in Logic 9 on a MacPro using a RME Fireface 800. So far it has never caused any hiccups in the system. It has been completely stable and not lost any presets. The manual has some good info about the nature of the plugin and how to use it. For the most part though, I skipped through it as I have had experience with these effects. It essentially is a single plugin for Gate/expander, Compression, and EQ. The setup is simple, no different than any other plugin, just instantiate on an audio track or buss and you are good to go. The interface however is a little dated looking to me. Everything is so compacted and somewhat hard to read I find myself squinting at the screen often.

As said before, this plugin is solid. No issues so far. For sound quality I give it a 10 out of 10. It does a good job performing what it is supposed to do (comp, eq, etc....) and in comparison to other plugins I use (lots of Waves plugins mainly) I notice it sounds a little different. I don't think it's any better than the Waves I use but it is different. Sometimes it seems warmer, and other times it seems to tighten up drums a little easier than other plugins. I have been using this plugin on and off for about 3 months.

What I like about this plugin is its overall sound quality and the fact that it sounds different to me than the usual plugins I use. What I don't like is the darn late 80's looking interface. It needs a refresh in my opinion. Or at the least, the ability to increase the size of the plugin. That would make it a lot easier to use. This almost $200. I would say it is worth every penny but I find myself using other plugins a lot because other ones are easier to see and therefore use. I have used many different plugins to do these same tasks. I would say in terms of sound quality, this is way up there. Honestly, I would probably have not bought this plugin if I knew how much I was going to end up disliking the interface.

Metric Halo CHANNEL STRIP complete
5
The Metric Halo Channel Strip plug-in is an all in one channel strip that consists of a compressor, an equalizer, a gate, and a sidechain for both the compressor and the gate as well. The plug-in comes in either VST, RTAS/TDM, or AU formats, and I believe it's only available for OS X and not PC, but I'm not 100 % sure on this since I'm running it on a Mac. Installing the plug-in is really simple, as one just needs to follow the step by step instructions as you would for installing any software. The interface of the Metric Halo Channel Strip has a good amount going on, but they've done a good job of breaking it up into different sections, so it should be pretty clear once you break it all down. The EQ is made up of 7 bands, and there are graphs that show you all of what you need to know in terms of processing. The EQ graph is definitely the most helpful, however. A manual shouldn't be necessary, but I haven't seen one so I can't speak to it's make up.

I'm currently running the Metric Halo Channel Strip on my home rig, which consists of Pro Tools LE 8 and a Mac Book Pro. The lap top has a 2.2 Ghz Intel Core 2 Duo processor and 4 GB of RAM, while I run Pro Tools with a Digi 002R audio interface and I monitor everything with a set of Adam A7s. This system has been adequate enough for me to run this plug-in, but I can't go crazy with it as this does take up a decent amount of processing power. I usually try to limit it to a few instances per session and this seems to be okay...

There are a lot of benefits to having the Metric Halo Channel Strip in your DAW suite, as it's a great plug-in to have around. There's just so much that you can do with it, as it's flexible and versatile. It has a pretty clean and realistic sound generally speaking, but there are some aspects of it that I like better than others. For example, I think that the EQ is the cleanest sounding processor here, and I don't really use the gate all that much. The compressor is awesome for drums bussing and beyond. The cost of the Metric Halo Channel Strip isn't too bad, so if you're looking for an all in one channel strip plug-in, it's worth giving this one a shot but I'd also recommend looking at the Waves SSL channel strips as well as those made by URS.
Did you find this review helpful?yesno
»