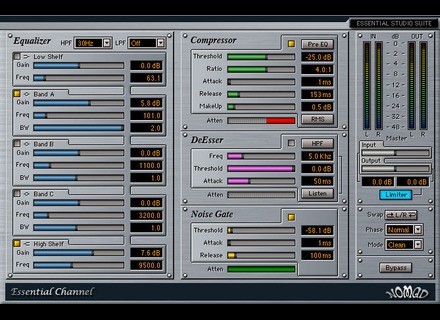 Nomad Factory Essential Channel
4
The Nomad Factory Essential Channel is a channel strip kind of plug-in that is one of the main plug-in found in the Essential Studio Suite of plug-ins from Nomad. The bundle comes with nine plug-ins in total, including this one. I didn't have any problems installing the bundle, as you do it all in one swoop and it's really straight forward. The plug-in and bundle as a whole are available in pretty much all imaginable plug-in formats, so compatibility shouldn't be much of an issue here. In this channel strip plug-in is an equalizer, a compressor, a de-esser, and a gate, so it's a pretty complete strip. The equalizer is made up of three bands, in addition to a high and low shelf filter. It also has a high and low pass filter in addition to the other mentioned bands. The compressor has pretty standard parameters, including those for threshold, ratio, attack, release, and gain make up, which is pretty much the standard configuration for a compressor. The de-esser and the noise gate are also really simple and easy to follow. Lastly, the plug-in has other features that you'd often see with a channel strip, like input and output metering, phase switch, and a few other settings to work with. If you're new to the world of processing, a manual might be a good idea, but I haven't seen one for this plug-in in particular so I can't speak to it's worth.

I'm running the Nomad Factory Essential Channel plug-in in Pro Tools LE on my system at home. The system is comprised of a Mac Book Pro lap top with 4 GB of RAM and a 2.2 Ghz Intel Core 2 Duo processor. I run Pro Tools LE 8 with a Digi 002R audio interface or a Digidesign Micro Box if I'm on the go. This system has been strong enough for me to run this plug-in without any performance issues whatsoever. I haven't had a need to run these channel strips on every track, so I can't say what kind of impact this might have if you wanted to do this.

While I wouldn't say that the sound of the Nomad Factory Essential Channel is necessary anything to write home about, it does sound pretty good and is capable of handling a number of things at once. It's really nice to have all of these processors in one spot, and it's perfect for getting a quick sound when I need a few of these processors at once. I do tend to use individual processor plug-ins for printing and real mixing, but this is nice to have just to throw up as needed. The full Nomad Factory Essential Studio bundle is absolutely worth checking out for this and the other plug-ins in there, as it's a great way to get a bunch of pretty cool plug-ins for a more than reasonable rate.
Did you find this review helpful?yesno
»