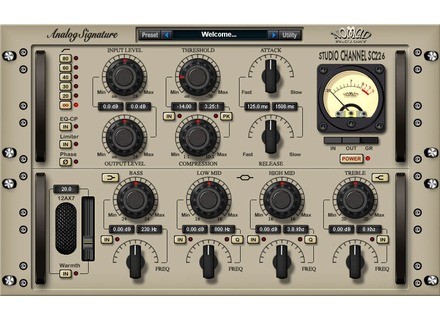 Nomad Factory Studio Channel SC-226
5
The Nomad Factory Studio Channel SC-226 is a channel strip plug-in that consists of both an equalizer and a compressor. I don't own this plug-in myself, but have used it extensively in the professional studio that I work at. Since I don't own it I wasn't involved with installing it. I didn't take me very long to get used to the interface as it's really straight forward and easy to understand. On the top of the plug-in is the compressor, which consists of parameters for input and output levels, threshold, compression (ratio), attack, and release. It also has a general high pass filter which can be set a five different frequencies between 20 Hz and 80 Hz. The EQ consists of four bands that are fully parametric and consist of parameters for gain and frequency. Lastly it has a virtual 12AX7 tube where you can set the level of tube warmth to your liking. No manual should be necessary, but I can't comment on it's make up since I haven't seen one myself.

The studio that I work at has the Nomad Factory Studio Channel SC-226 on a few different systems since we have a number of different studios on site, but all of the systems are Pro Tools HD based. The A room has a Mac Pro desk top computer consisting of dual 2.66 Ghz Intel Xeon processors and 10 GB of RAM. We never have any problem running plug-ins, so this system isn't exactly the best judge for determining a plug-in's performance.

The Nomad Factory Studio Channel SC-226 is overall a really awesome plug-in to have at your disposal. It's super easy to use and has a whole lot of versatility and flexibility. I generally will only use it when I'm looking for a warm sounding compressor, but the EQ sounds good as well even though I'll generally only use it when I'm also using the compressor. The tube warmth parameter is really cool as it's great for getting some saturation going. This is a full sounding virtual channel to say the least and would be an absolute asset in any studio situation.
Did you find this review helpful?yesno
»